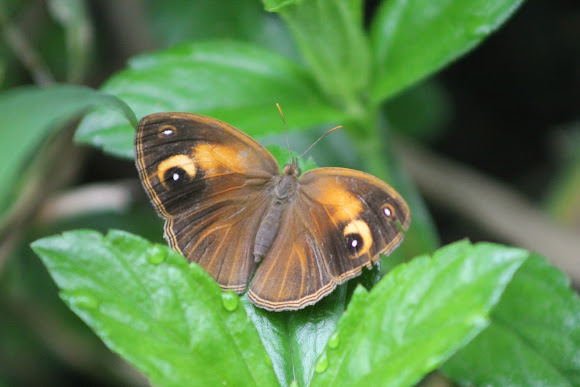 #1, #2 Male. #3 Female. The female is duller in appearance and bigger in size. The upper side is rusty brown. It has a black ‘eye spot’ with a white centre on the forewing. It is enhanced by a large crescent-shaped orange coloured patch just above the ‘eye spot’. The white patch near the apex varies in size. A bright-coloured patch is apparent on the cell end and extends towards the outer margin. The minute orange spots on the hindwing may be absent. Two marginal lines are distinct on the hindwing. The underside is highly variable both in background colour and pattern. The background colour is always paler than that of the upper surface and the ‘eye spots’ encircled in beautiful silver lines are very prominent. Dry zone individuals are much lighter in colour. These butterflies can be found in shady places in the forest, but never in gardens. It is common in wetter parts of the island, but also appears in dry zone forests. It feeds on fallen rotting fruits, decaying matter on the ground, and flowers. It flies among shrubs and grasses in gloomy forests and it is easily disturbed. It occasionally basks under the morning sun with partially opened wings. When alarmed, it suddenly closes its wings and only flies away if the threat is still approaching.

Yes, I love this platform!

Yeah, even with a lot to study, I go out for a walk around the area every day with my cam :)

I agree, it is also a very good platform for wildlife photography, one of the best ones I've found.

I'm sure you'll be okay with the exams, but good luck.

Time goes by so fast though, so I would just say enjoy it even though it is not always fun. :)

I didn't get to go out to the trail the other day, it was very gloomy, windy, and cool. Winter is coming soon in Canada, although as soon as the next nice day comes I hope to get back out. Maybe explore some newer trails.

Thank you! I can't wait until this exam is over and I'm free again :D
Oh, I've been thinking the same. But as this is a platform for wildlife photography, a chat function won't be much of use most of the time. Still, it would be nice to have a one :)
I don't study a particular subject yet. There is a governmental exam in our country with 9 subjects, compulsory for every school student. There's a lot to study :(

Oh, I just searched it. There is even a part that says "Butterfly Walk" 🙂
I hope that it opens soon and you catch up on your studies so you can enjoy the wildlife and butterflies there.

I think your garden will definitely work out. We have programs here by the town that will declare your garden a local bee / butterfly garden if you put enough host plants up. It is a very cool program. I would ask you what you are studying, but I don't want to take too much of your time. 😄
It is too bad that this site doesn't have a chat function.

Yes, there's a wetland park nearby. Search as "Beddagana Wetland' and you'll see. There are man-made trials inside it so we can go and explore. I'm sure there are plenty of butterfly species there than in my home area. I've gone there a couple of times before I started photography. These days it's closed because of traveling restrictions but as soon as it's open to the public again, I'll pay a visit for sure.
Tbh, I'm a bit busy this year with my studies. But as soon as the exams are over and I'm done with them, I'm planning to change my garden so it's more butterfly friendly. Like planting host plants and feeding plants etc. Not sure if it'll work but we'll see :)

Yes, that is a sad reality for pretty much every country at the moment. But that is why it is so important to continue spotting them and learning as much about them as you can. Hopefully they don't get completely eliminated by the buildings. Is there somewhere you can go that is close but just outside your town / city?

I really hope so. But new buildings are being built now. So, it'll be more civilized soon, and there won't be enough habitats for some butterflies. The number of species I recorded throughout the years is going more and more low. Maybe it's because of the season. I'll have to wait and see when spring comes again. Even though we don't have extreme seasonal changes here, the slight change does affect the population of butterflies.

Aww. :(
Don't worry, you seem very persistent! I'm sure that eventually they will come. And new ones too! :)

Thank you :)
Some of the butterflies I saw back then never visited this area again. It's a pity that I can't capture them now with my cam.

I checked it out. your photos are still good! Considering they were with a phone. :)

I first made my account here last year, in May or so. But then I lost that account's password so I made this new one this year in July.
This is my previous account: https://www.projectnoah.org/users/Nature...
Most of its spottings were taken with my phone so the quality is not very good. Please don't mind :)
Now I'm using a camera instead.

Okay, I've been looking! How long have you been on this site?

Yes, you can address me as Rithmini :)
I got to take this shot during a family vacation. And even though it was business work for my father, my purpose was to look for butterflies as much as I can. I found this one near the tea garden we have there. While others were working in the garden, I grabbed my camera and wandered around looking for butterflies to photograph lol :D
There are a few other shots I got from the same area. Check them if you want :)

Okay Rithmini, well I'm glad you got to take the shot. Do you ever travel specifically to look for butterflies? Or mostly while you are doing other things? I hope Rithmini is the proper way to address you. :)

@Dylan: It is a beautiful pattern! This one was quite common in the area I photographed it. But we don't have any in them in my hometown. Maybe it's too civilized here for it to live peacefully.

Sahana Vajirasena a month ago

No problem! Yes, the eyes are absolutely beautiful. What an amazing pattern!

This one loves to show off its 'eyes' on the upper wing.

I think this is my favorite photo in your spottings. :) It is an amazing shot!

Ikr! Those 'eyes' get the spotlight

It was named the gladeye for a reason :)

I used to use a phone but now I'm using a camera. The shots I took with the phone are on my other account. You can check them out here: https://www.projectnoah.org/users/Nature...
I forgot the password of it and made this new one...
Yes, I re-ordered the description, Thanks for the reminder!

BTW, don't forget to edit your description to reflect the re-order of the photos.