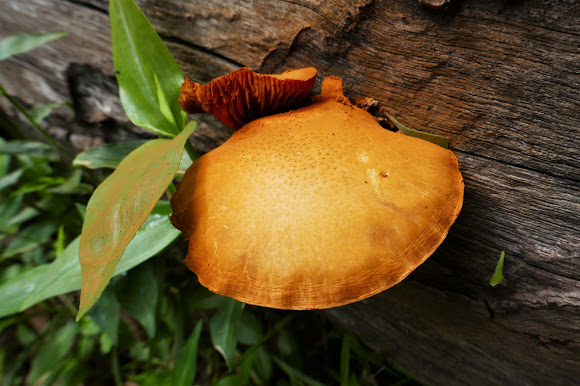 Rusty orange-coloured agaric mushrooms, commonly known as "rustgills" and belonging to the genus Gymnopilus. I could definitely see the accumulation of spore dust on the cap and the dead trunk, so am reasonably confident Gymnopilus is the correct genus. Smooth, convex cap approx. 8 cms in diameter (the smaller cap half that size). Stipe about 8 cms long, and thin but slightly bulbous at the base with a veined appearance. Neat margin, albeit slightly wrinkled around the edge, and close, attached gills. The smaller specimen appeared to have deeper gills and an upturned margin. Its cap had already broadened and turned undulate, and no doubt the larger cap will do the same. Info on the Gymnopilus genus - see notes. PS: When first viewing these photos, something I noticed about the larger cap was, despite looking smooth, it actually had very fine stubble on its surface. I didn't touch the cap so I don't know if it had a bristled texture, but it can be seen quite clearly in the 'enlarged' 1st photo. At the time I made the spotting, I actually thought these were pores on the cap surface, almost like you'd see on the skin of an orange.

Spotted in native bushland, in northwest Sydney. These specimens were growing on a dead trunk beneath eucalyptus trees. Blackbutts, Sydney turpentines, and large red gum and blue gums overshadow the area. Well-saturated after frequent rains these past few weeks, and well-shaded area for most of the day. Fungus is flourishing.

Gymnopilus is a genus of gilled mushrooms within the fungal family Strophariaceae. The genus contains over 200 species worldwide. The fruit body is typically reddish brown to rusty orange to yellow, medium to large, often with a well-developed veil. Most members of Gymnopilus grow on wood but at times may appear terrestrial if the wood is buried or decomposed. NB: Members of Pholiota and Cortinarius are easy to confuse with Gymnopilus. Pholiota can be distinguished by its viscid cap and duller (brown to cinnamon brown) spores, and Cortinarius grows on the ground. Beginners can confuse Gymnopilus with Galerina, which contains deadly poisonous species. (Wiki). Just a handy link - http://www.wikiwand.com/en/Gymnopilus_sa...