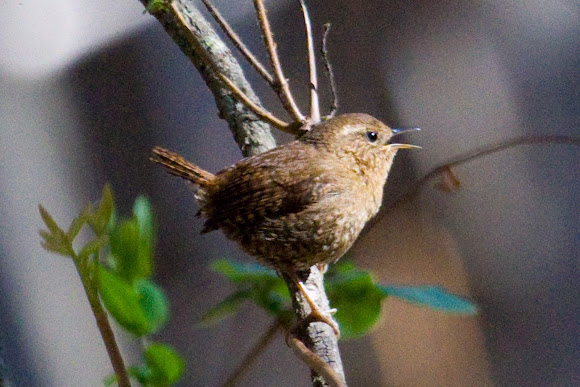 Rufous brown above, richly colored below, barred with darker brown and dusky, even on wings and tail. The bill is dark brown, the legs pale brown.

Formerly known as the Winter Wren. The Pacific Wren (Troglodytes pacificus) is a very small North American bird and a member of the mainly New World wren family Troglodytidae. It was once lumped with Troglodytes hiemalis of eastern North America and Troglodytes troglodytes of Eurasia as the Winter Wren. It breeds along the Pacific coast from Alaska to California and inland as far as Wyoming and the Black Hills of South Dakota. It migrates through and winters across the western half of the United States and Canada.

I have 3-4 Carolina Wrens in my yard & they just amaze me with their voices!

This little male wren was singing his heart out. It really is amazing how loud this tiny wren can be.

How sweet! Do they have a BIG voice like the Carolina Wren?