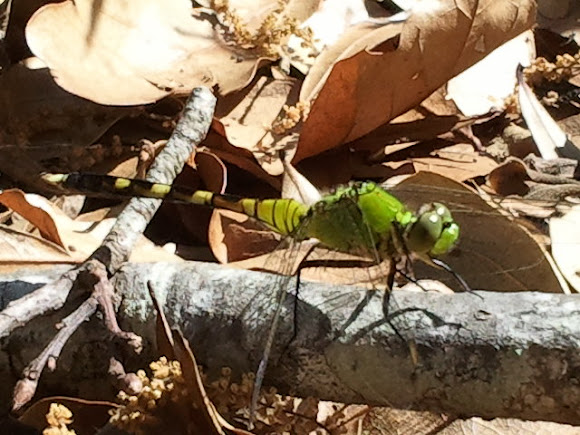 This is one of the most common West Virginia dragonflies, and may be found at almost any pond in the state in the summer months. You may spot them in swamps or meadows as well. The mature male (shown above) has an unmarked powder blue body, with white appendages on the tip of the abdomen. The eyes are green. The females and immature males look markedly different from the mature males. Their bodies are green with black markings on the abdomen, and the abdomen becomes progressively blacker toward the rear. Their eyes are green to brown. Both males and females have green faces. At some West Virginia ponds two common blue dragonflies are flying at the same time: the male Common Pondhawk and the male Blue Dasher. The Pondhawks are the larger of the two—the Dashers are noticeably smaller. Also note that the male Dashers have black toward the rear of their abdomen, while the male Pondhawks are blue with the terminal appendages white. One final difference is that Common Pondhawks have green faces while Blue Dashers have white.

Depending on the species of dragonfly, the habitat also varies. Some species of the dragonfly inhabit marshlands while others prefer clean water or the still waters of ponds. There are still other species which prefer cool running waters of the streams or rivers. Dragonflies are extremely choosy about their habitat. They would never reside around polluted water bodies. If you happen to see dragonflies around, it is a sure sign that the ecosystem is in perfect condition. Remember, dragonflies are sensitive to pollution.

Tillyard claimed to have recorded the Southern Giant Darner flying at nearly 60 miles per hour (97 km/h) in a rough field measurement.[3] However, the greatest reliable flight speed records are for other types of insects.[4] In general, large dragonflies like the hawkers have a maximum speed of 10–15 metres per second (22–34 mph) with average cruising speed of about 4.5 metres per second (10 mph).[5]