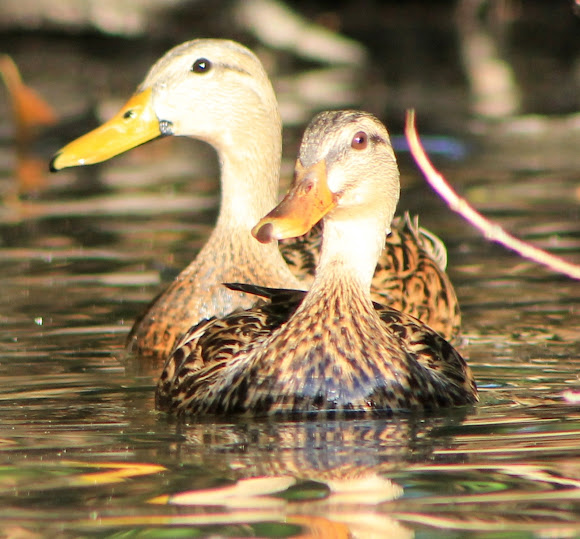 The Mottled Duck (Anas fulvigula[2]) or Mottled Mallard is a medium-sized dabbling duck. It is intermediate in appearance between the female Mallard and the American Black Duck. It is closely related to those species, and is sometimes considered a subspecies of the former, but this is inappropriate (see systematics).The adult Mottled Duck is 44–61 cm (17–24 in) long from head to tail. It has a dark body, lighter head and neck, orange legs and dark eyes. Both sexes have a shiny green-blue speculum (wing patch), which is not bordered with white as with the Mallard. Males and females are similar, but the male's bill is bright yellow, whereas the female's is deep to pale orange, occasionally lined with black splotches around the edges and near the base. The plumage is darker than in female Mallards, especially at the tail, and the bill is yellower. In flight, the lack of a white border to the speculum is a key difference. The American Black Duck is darker than most Mottled Ducks, and its wing-patch is more purple than blue. The behaviour and voice are the same as the Mallard. Mottled Ducks feed by dabbling in shallow water, and grazing on land. They mainly eat plants, but also some mollusks and aquatic insects. The ducks are fairly common within their restricted range; they are resident all-year round and do not migrate. The breeding habitat is coastal marshes. The nest is built on the ground amongst vegetation, such as bull-rush and marsh grass. There are two distinct populations of Mottled Ducks. One population, A. fulvigula maculosa (Mottled Duck), lives on the Gulf of Mexico coast between Alabama and Tamaulipas (Mexico); outside the breeding season individual birds may venture as far south as to Veracruz. The other, A. fulvigula fulvigula (Florida Duck), is resident in central and south Florida and occasionally strays north to Georgia. The same disjunct distribution pattern was also historically found in the local Sandhill Cranes. Along the Gulf of Mexico coast, the Mottled Duck is one of the most frequently banded waterfowl. This is due in part to the fact that it is mostly non-migratory. Approximately one out of every twenty mottled ducks is banded, making it an extremely prized and sought after bird among hunters

The Floridan population, which occurs approximately south of Tampa, is separated as the nominate subspecies Anas fulvigula fulvigula and is occasionally called the Florida Duck or Florida Mallard.[3]) by being somewhat lighter in color and less heavily marked; while both subspecies are intermediate between female Mallards and American Black Ducks, the Florida Mottled Duck is closer to the former and the Mottled Duck closer to the latter in appearance; this is mainly recognizable in the lighter head being quite clearly separated from the darker breast in Mottled, but much less so in Florida Mottled Ducks. As the subspecies' ranges do not overlap, these birds can only be confused with female Mallards and American Black Ducks however; particularly female American Black Ducks are often only reliably separable by their dark purple speculum from Mottled Ducks in the field. mtDNA control region sequence data indicates that these birds are derived from ancestral American Black Ducks, being far more distantly related to the Mallard, and that the subspecies, as a consequence of their rather limited range and sedentary habits, are genetically well distinct already (McCracken et al. 2001). Florida subspecies As in all members of the "mallardine" clade of ducks, they are able to produce fertile hybrids with their close relatives, the American Black Duck and the Mallard. This has always been so to a limited extent; individuals of the migratory American Black ducks which winter in the Mottled Duck's range may occasionally stay there and mate with the resident species, and for the Mallard, which colonized North America later, the same holds true (McCracken et al. 2001). While the resultant gene flow is presently no cause for concern,[4] habitat destruction and excessive hunting could eventually reduce this species to the point where the hybridization with mallards would threaten to make it disappear as a distinct taxon (Rhymer & Simberloff 1996). This especially applies to the Florida Duck (Mazourek & Gray 1994), in the fairly small range of which rampant habitat destruction due to urbanization and draining of wetlands has taken place in the last decades; this in combination with climate change affecting the Everglades could be sufficient to cause the Florida Duck to decline to a point where hunting would have to be restricted or prohibited (McCracken et al. 2001). At present, these birds too appear to be holding their own with a population of 50.000-70.000 individuals (BirdLife International 2004).

Mottled Duck, Identification, All About Birds - Cornell Lab of Ornithology

With that olive bill and contrasting head/body makes it definitely a Mottled Duck.

ok I will look into it more after work today, Thanks

I am not sure but they could be either female or juvenile males.

yeah that's what I was thinking, but the one is larger and Iam confused by that, but I figure you guys will steer me in the right direction