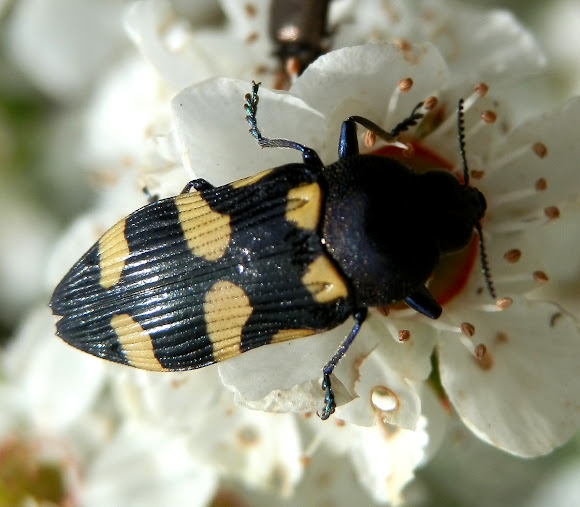 This 13 mm long jewel beetle had dark elytra with 6 ivory coloured patches on the upper surface and a small ivory patch along the lateral margin of each wing near the wing base. Thorax, head, antennae and legs were dark with a metallic sheen.

Spotted on broom tea-tree with several other species of Castiarina.
Occurrence record: http://bie.ala.org.au/species/urn:lsid:b...

There appears to be some confusion with the names of the species >me According to John Tann (second link), these would be C.inconspicua that shows varying patterns over a period of time- https://www.flickr.com/photos/31031835@N...
https://www.flickr.com/photos/31031835@N...
but in ALA this is stated to be C.australasiae
http://bie.ala.org.au/species/urn:lsid:b...
The beetle in my spotting shows very small patches - would they be undergoing further change ?
My thanks to MartinL for clarification re ID.

Thanks Maria. as Martin says there are so many more of these -it would be good to get to see them (all?) . They are quite difficult to spot sometimes, for me anyway -these close-ups are quite deceptive.

Nice close-ups, Leuba, and interesting discussion that this spotting generated.

Point taken Martin. Thanks for the clarification. Changing pattern overtime seemed bizarre to me but ...! I can also see that the loop numbers matter.
@catgrin - thanks for the input. I agree colours may vary but need to go with pattern. There are more of these beetles to come - more challenges and discussions !!

I do not think the patterns change over time.

Check this side image.
https://www.flickr.com/photos/ogcodes/14...

Hi - I hope you guys won't find this an intrusion. I was curious about the variety in species after I saw the comments, so I did a bit of hunting. I found a pretty good Flickr group that has very clear shots of the different Jewel Beetles. A lateral view of C. australasiae looks like it matches patterning, and is shown as colored more strongly (yellow not cream). If that's more likely to vary - I'd bet that's your beetle.

I am still learning these, but I do have a theory.
I am confident that yours and mine are C. australasae. The basal yellow blotch (to use the technical term by Blackburn) is separate from the lateral blotch but continuous for C. inconspicua.
If you follow the patterns of puncturations within the basal blotch, they do not terminate but loop back again. There is one such loop in australasae and three in inconspicua. If John Tann is correct in his identification (which I suspect is accurate) this definition should be consistent.

Martin, if you have a look at this , could we discuss please. Thanks.