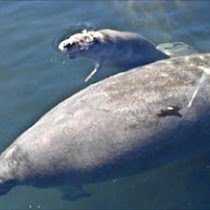 Please, post your photos and sighting of Manatees in Florida. To raise awareness of the Manatees. In 2011was the third straight year with a high number of manatee deaths. It would be interesting to see all the areas where Manatees are sighted! *Edited by Project Noah management team to comply with user created mission rules. Sign in to join mission

Manatees Length: 10-12 feet. Weight: 1,500-1,800 lbs. Lifespan: 50-60 years in the wild. Manatees are herbivores; they eat marine and freshwater plants. Population. The largest population of manatees is found in Florida, where there are over 3,000 individuals Manatees take up residence primarily in Florida’s coastal waters during winter.The Florida Fish and Wildlife Conservation Commission reports that 2011 was the third straight year with a high number of manatee deaths. Kevin Baxter of the Fish and Wildlife Research Institute in St. Petersburg said that 453 dead manatees were found in Florida waters last year. That total makes 2011 the second deadliest for manatees. The record was set in 2010 when a staggering 766 carcasses were documented. West Indian manatees in the United States are protected under federal law by the Marine Mammal Protection Act of 1972 which make it illegal to harass, hunt, capture, or kill any marine mammal. West Indian manatees are also protected by the Florida Manatee Sanctuary Act of 1978. Violations of these federal or state laws can be met with civil or criminal convictions associated with monetary fines and/or imprisonment.threats to manatees include destruction and degradation of their coastal and freshwater habitat. The leading known cause of death is by boat strikes; propellers and hulls inflict serious or mortal wounds. Most manatees have a pattern of scars on their backs or tails after surviving collisions with boats. Scientists use these patterns to identify individuals. Manatees are also vulnerable to cold water. They have also been found crushed or drowned in flood-control gates and suffer harm from exposure to toxic red tide. In addition, a large number of manatees die from unknown causes each year.