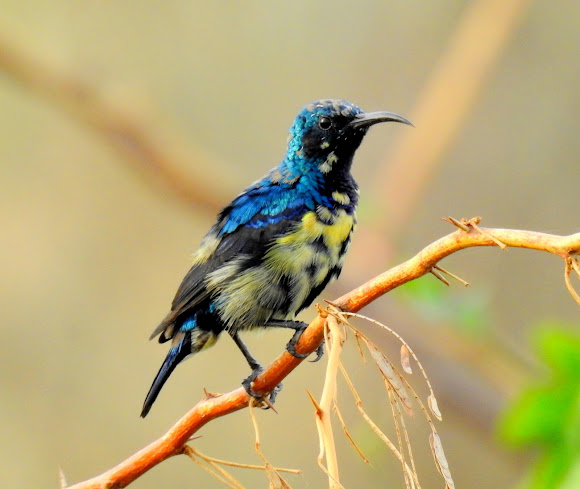 This small sunbird has a relatively short bill, a dark and short square ended tail with distinctive sexual dimorphism. Less than 10 cm long they have a down-curve bill with brush-tipped tubular tongues that aid in nectar feeding. The male is glossy metallic purplish black on the upper parts with the wings appearing dark brown. The breeding male has the underparts also of the same purplish black, but non-breeding males may show a central streak of black on yellow underparts. (Birds in this eclipse plumage were once designated as a species, C. currucaria) In the breeding plumage, the male can be confused with the syntopic Loten's sunbird which has a long bill and distinctive broad maroon band on the breast. Breeding males will sometimes show their yellow pectoral tufts in displays. There is a patch of bright blue on the shoulder of breeding males. The maroon shine on the feathers of the collar around the neck is visible mainly during the breeding seasons.

The nest is a pouch made of cobwebs, thin strips of vegetation, lichens and bark. The entrance hole on the side is often shaded by an overhanging projection. The nest is built almost entirely by the female. The nest material is not woven and most of it is held together by cobwebs. About five to ten days may be taken in the building of the nest. The inner cavity is expanded by the bird by openings its wing and turning around on the inside.