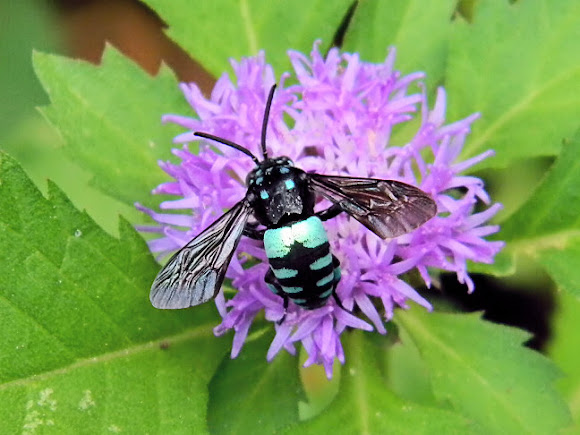 "A stocky bee, notable for its brilliant metallic blue and black banded colors, cuckoo bees are stunningly beautiful but these bees lead a life of deceit! They behave like cuckoo birds -- laying their eggs in the nests of other bees. The neon cuckoo bee, Thyreus nitidulus, with glittering metallic blue spots, lays its eggs in the nests of blue banded bees (Amegilla cingulata). Several subspecies are known - the nominate race nitidulus is found across eastern and northern Australia, specifically New South Wales, Queensland, South Australia and the Northern Territory, as well as New Guinea. Other species are found in southeast Asia. Like all bees, the neon cuckoo bee is covered by furry branched flattened hair, which is responsible for both the black and blue colours. Pale blue hair covers much of the face on the head, as well as patches on the sides of the thorax and the legs. The abdomen is striped with bright blue and black, and the transparent wings are purple-tinged brown in colour. The bee is sturdy in build, with a reinforced thorax. The female neon cuckoo bee seeks out the burrow nests of the blue-banded bee, and lays an egg into a partly completed brood cell while it is unguarded. The larval cuckoo bee then consumes the larder and later emerges from the cell."

Spotted on Brazilian button flower (Centratherum punctatum) in a large semi-urban yard & garden situated next to a disturbed patch of remnant forest.

I haven't found any commentary on a possible reason for the the striking blue coloration. The parasite's host species Amegilla cingulata, despite being named the "blue banded bee", is very drab compared to the neon cuckoo bee. To see photos of host and "kleptoparasite" together see http://www.brisbaneinsects.com/brisbane_...