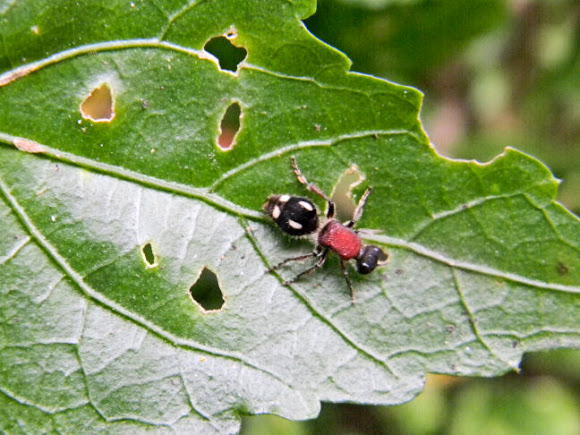 This is a female, so-called velvet "ant" of the family Mutillidae which "contains more than 3,000 species of wasp whose wingless females resemble ants. Their common name velvet ant refers to their dense pile of hair which most often is bright scarlet or orange but may also be black, white, silver, or gold. Their bright colours serve as aposematic signals. They are known for their extremely painful sting, facetiously said to be strong enough to kill a cow, hence the common name cow killer or cow ant is applied to some species. Unlike a real ant, they do not have drones, workers, and queens. However, velvet ants do exhibit haplodiploid sex determination similar to other members of Vespoidea (JH Hunt 1999)." http://en.wikipedia.org/wiki/Mutillidae

I "lost" the creature in the Hibiscus foliage, then I noticed/felt it crawling on my arm (4th photo). I was a bit worried about the possibility of a sting but this velvet ant was not in any way aggressive or stressed and seemed quite content to stroll among the forest of hairs. This is the first time I've knowingly encountered a species of this group here (New Guinea).

Thanks auntnance & Matthew. No I wasn't sure. It's the first one like this I've ever seen here in New Guinea. I'll do some more looking now :-)

Yep, Nance, pretty sure it is a wingless wasp...

Are you sure this isn't one of the wingless wasps or 'velvet' ants?