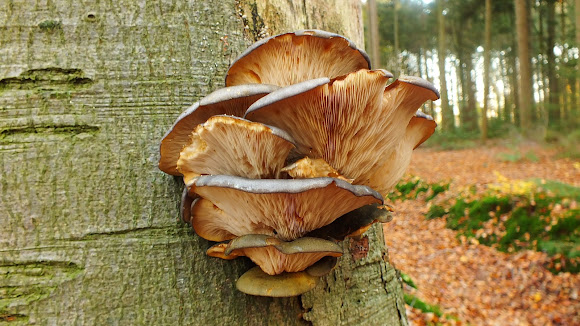 The cap of Sarcomyxa serotina is 3 to 10 cm across, half-round or kidney-shaped often with a scalloped incurved margin. It is convex, slightly downy when young, becoming smoother with age. It is slimy when wet, olive green, often with violet and brown tones, eventually fading to light brown. The gills are adnate to stem, crowded, initially yellowish becoming browner with age. The stem is lateral, stout and up to 2 cm long or often absent altogether, usually yellowish but sometimes light brown.

Sarcomyxa serotina is saprobic, solitary, in small groups or in overlapping tiers on rotten wood, most often of broadleaf trees but found also occasionally on conifer timber.

Spotted in a mixed forest on a dying beech (Fagus sylvatica) in rural area of Colmschate, Holland. (sources:see reference)

Thank you, Marta. Too bad this tree is marked to be cut down.