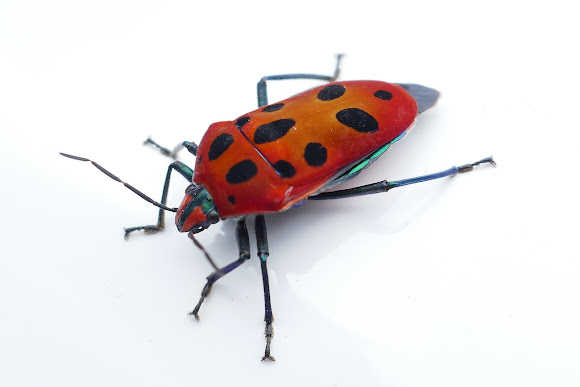 Mallotus Harlequin Bug (Cantao parentum) is a species of jewel bug, and belongs to the family Scutelleridae. The species name ‘parentum’ refers to the fact that the females demonstrate parental care by guarding the eggs and young nymphs from predators. Length about 20 mm. This species is similar to the Hibiscus Harlequin Bug but has a more elongated body. It is orange with two black spots on the thorax and eight spots on the enlarged, shield-like scutellum. Despite its general size, shape and appearance, this is not a stink bug species. My first encounter with this jewel bug species.

The Mallotus Harlequin Bug sucks the sap of Mallotus trees (Green or Red Kamala) in dry rainforest in southeast Queensland and northern New South Wales. During winter, large numbers of adults cluster together and may remain inactive for two to three months. I found this specimen on a (white) motor car which was parked directly beneath some large Tuckeroo trees (Cupaniopsis anacardioides). This is a native tree species, and its usual habitat is littoral rainforest on sand or near estuaries, in eastern and northern Australia. There is also a freshwater pond and wetlands area nearby.

This group of true bugs are often called jewel bugs, but they are easily confused with beetles because they have metallic backs. Beetles have elytra that are their first pair of modified wings, whereas Scutelleridae bugs have an expanded scutellum, a triangular central plate that (almost) completely covers their back and both pairs of wings, leading to their other common name, shield-backed bugs. There are 25 Australian species of jewel bugs in the family Scutelleridae.

Thanks, Leanne. That is part of the fun, and I really enjoy the research too. I feel so cheated when a spotting has absolutely no notes or description details. That's just lazy.

Great series Neil. I always love all your extra information on your spottings.

It certainly is, Chayanika. It really stood out against the white paint of the car.

Thanks, Mark. I was running so late at work that day, so what's a few more minutes taking photos of a bug?

Oh wow. Thanks very much, Ashley.

I think so too, Lauren. Thanks.

Thanks, maplemoth662. I spotted it on the car, and being a white car, it really stood out. Any other colour and I may have missed it.

Thanks, Zlatan. A first encounter for me. It's a very attractive bug.