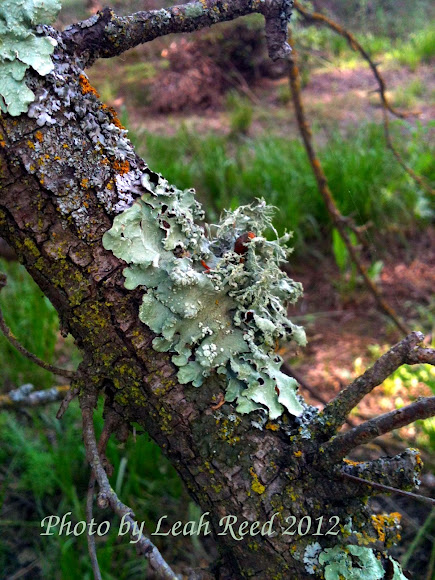 Lichens are amazing. They live in some of the harshest environments on Earth, including the Arctic, Antarctic, and in deserts. When conditions get too severe even for them, lichens have the ability to go dormant. When favorable temperatures or rainfall return, they begin growing again. Lichens are considered "pioneer species" in some habitats because they are often the first organisms to begin growing on newly exposed rock or dirt surfaces. Lichens are neither plants nor animals, but living partnerships between algae and fungi. Fungi live in or on other living things or on dead and decaying organic matter. Algae range from single-celled organisms to giant kelps. Algae differ from higher plants in that they do not have leaves, roots, or flowers. When a blue-green or green alga comes into contact with a fungus, a lichen can result. The pale green fern looking lichen growing on top of them all is a Fruticose lichen called "Oakmoss Lichen" (Evernia prunastri). This species is harvested commercially in south-central Europe, and then sent to France where it is used in the manufacture of fine perfumes. The lichen acts as a fixative for other scents, and also adds a subtle herbal fragrance of its own. The flat stacked looking lichen is a Foliose lichen called "Common Greenshield Lichen" (Flavoparmelia caperata) And the little bits of orange and yellow-green lichen is a Crustose lichens sometimes called "Tree Kelp" or "Orange Lichen" (Xanthomendoza fallax). Not much is known about this species other than it makes a wonderful dye.

Lichens are difficult to find in urban areas, because they are very sensitive to air pollution. Evernia prunastri grows primarily on the trunk and branches of oak trees, but is also commonly found on the bark of other deciduous trees and conifers such as fir and pine. Flavoparmelia caperata can be found on bark of trees, but occasionally on rock. Xanthomendoza fallax can be found on bark, rarely rock or detritus, in rather humid (to dry, but not very dry) microclimates

For centuries, people have used lichens to make bread and beer, as a vegetable, to make soup, and as baby food. Lichens contain substances that fight infections and diseases such as scarlet fever. Lichens were used by native Americans and other cultures to made dyes for cloth, as dressings for wounds, to cure headache and toothaches, as a treatment for small pox, as 'false hair' to decorate masks, and even as baby diapers. Today, lichens are used to make modern perfume and brilliant dyes.