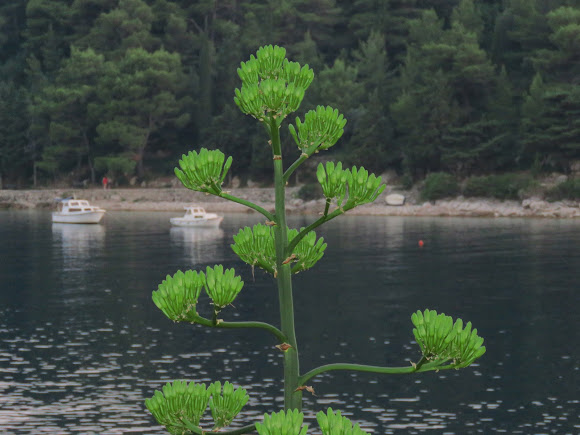 Agaves are succulent plants forming a large rosette of thick and fleshy leaves, grey-green in color. These rosettes are monocarpic, meaning their lives end with the flower formation. Flowers form every 20 to 25 years. When flowering, a tall stem or "mast" is formed from the center of the rosette and bears a large number of short, tubular flowers. After flowering and fruit formation and maturity, the plant dies but often leaves 'suckers' - or young plants coming from rhizomes, which continue the cycle.

Garrigue, and pin forest, near the coast and usually on rocky terrain.

In one of my previous posting, I was saying that the summer 2015 was a summer of shrikes and swallows on Dubrovnik riviera - I never seen them in such numbers... Another thing was also interesting - the Agava blossoms, they were also everywhere, in much larger numbers than ever before...