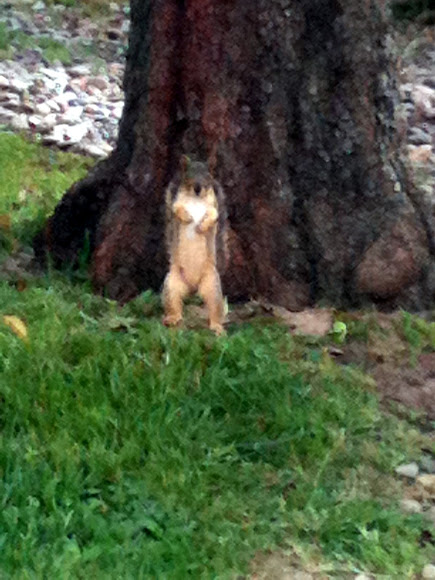 The Eastern Gray Squirrel is a tree dwelling rodent, a very common species of squirrels, mostly found in North America. It is a tree squirrel, which belongs to the genus Scirus, and is native to Midwestern United states. It is often found in woodlands, suburban areas and urban areas. It is a prolific and an adaptable species. I was earlier introduced in the areas western United States, and now it thrives there. These squirrels are not gray in color; they are actually a mixture of black, browns and whites. They are actually banded with whitish ends, due to which they assume a grayish look. The eastern gray squirrels have a long history; they can be dated back in the past, when the images of these squirrels were found carved in the temper pipes that were made by the Hopewell culture. In the 1807, the large population of these squirrels caused a whole lot of destruction in Ohio, due to which the people were forced to hunt for them. Therefore a massive hunt was organized in the 1822, and this resulted in the killing of 19,666 squirrels approximately. Now, the prime range of this eastern gray squirrel is found in the hill country. These squirrels prefer oak-hickory forests, but they have the capacity to survive in other forests as well as urbanized parks and yards.

The Eastern Gray Squirrel is the largest of all tree squirrels that is found in eastern Canada. It inhabits large areas of the dense woodlands and the ecosystem that spreads across 40 acres of land. Since they are predominantly nut-eating species, they are found in the vast tracts of Oak and Hickory forests in North America. These forests are the habitat of these squirrels since they contain dense vegetation which is a source of food for these squirrels. Eastern Gray Squirrels construct their dens on the bare branches and hollow branches of trees. They also use the abandoned nests of other birds for shelter. The eastern gray squirrel is generally found in Western North America, in Canada< in Alberta, in the United States, California, Oregon, San Francisco, Santa Clara, San Mateo. It is one of the most common squirrels in the suburban areas, in North America and California. It is an invasive species since it has a very small size. It inhabits the regions of United States, Southern Canada, Texas, Florida, Ireland and Australia. It also spreads in regions across England, and parts of southern Scotland. It is also an established species in many parts of southern Scotland and mainland Britain. They have also been introduced in parts of European Union. They are being thought to displace the common red squirrels from some regions where they earlier existed, and are soon replacing it.