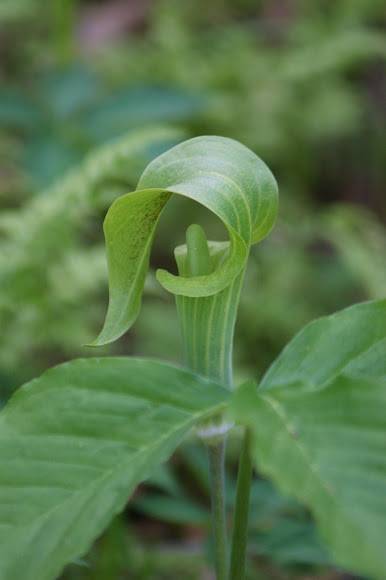 It is a herbaceous perennial plant growing from a corm. It is a highly variable species typically growing 30–65 centimetres (12–26 in) in height with three-parted leaves and flowers contained in a spadix that is covered by a hood.

It is native to eastern North America, occurring in moist woodlands and thickets from Nova Scotia west to Minnesota, and south to southern Florida and Texas. This one was spotted at the Stevens Creek Heritage Preserve near Clarks Hill (McCormick County), SC.

Other common names include bog onion, brown dragon, Indian turnip, and wild turnip. The plant contains calcium oxalate crystals as raphides in all parts, and because of this consumption of the raw plant material results in a powerful burning sensation. It can cause irritation of the mouth and digestive system, and on rare occasions the swelling of the mouth and throat may be severe enough to affect breathing. If the plant is properly dried or cooked it can be eaten as a root vegetable. A preparation of the root was reported to have been used by Native Americans as a treatment for sore eyes. Preparations were also made to treat rheumatism, bronchitis, and snakebites, as well as to induce sterility.