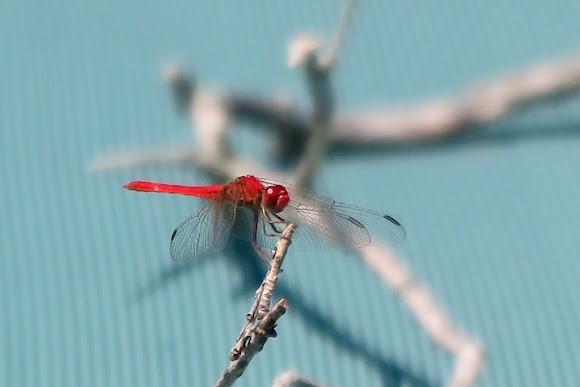 Quite a striking dragonfly, and very elusive. It took me forever to get close enough for a single photo. A beautiful red colour. Approx. 4 cms in length. The female of the species is a more subtle orange colour. Red Arrow's are often confused with another species - Fiery Skimmer (Orthetrum villosovittatum).

On a fallen branch that had landed on the netting cover of a backyard swimming pool. This species prefers terrestrial aquatic habitats.

This fellow had a companion, but of a different species - a Blue Skimmer Dragonfly (Orthetrum caledonicum). http://www.projectnoah.org/spottings/113... There was no aggression between the two, and they would often fly off and return together.