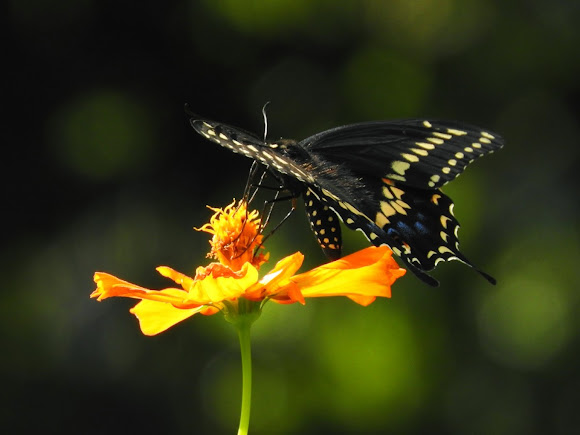 The Black Swallowtail has a wingspan of 2.7-3.3 inches and is black with two rows of yellow spots on the upper wing surface, with some shades of blue in between the rows of yellow. There is also an isolated yellow spot on the front edge of the wings. Females have more prominent blue and smaller yellow spots, and males have larger yellow spots and less prominent blue. Their underwings are not sexually dimorphic, the hindwings have rows of bright orange spots separated by areas of powdery blue and a red spot with a black dot inside like a bullseye on the edge and the forewings have two rows of pale yellow spots.

The Black Swallowtail is found from southern Canada through to South America. They are most common east of the Rocky Mountains in North America. They are usually found in open areas like marshes, parks, fields, or deserts, and they like tropical or temperate habitats.

This butterfly is on an orange cosmos flower. I think it is a male based on the size of the yellow spots and the less prominent blue. Other butterflies frequenting the same garden were Eastern Tiger Swallowtails, Pipevine Swallowtails, at least one Monarch, Gulf Fritillaries, and I think one other breed of swallowtail. This garden is at our local library.