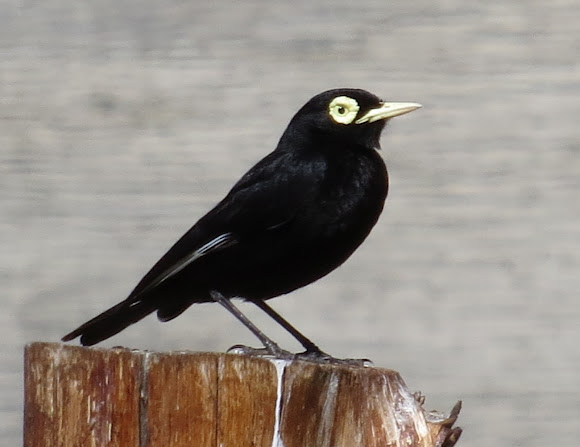 This is one of the most interesting birds I saw in South America. It has really thick eye rings that looks like it is wearing glasses. One other characteristic of this bird is that is has white wings. The last photo (although blurry) shows the white wings. The Laguna Nimez Reserve, El Calafate, Argentina is an IBA Important Bird Area with over 80 species of birds, both Patagonian residents and migrants.

For those from northern temperate regions, it seems ludicrous that a tyrant flycatcher could be so boldly and beautifully patterned as the Spectacled Tyrant. This is a looker of a bird, one that makes you do a double take. The bird is black, but also has a characteristic upright stance and long legs and chooses to perch in open and obvious places. On the face is a very large yellow spectacle created by a large fleshy orbital ring, similarly bright and noticeable is the yellowish white bill. This gives it the Argentine name of “pico de plata” or silver bill. But the black plumage comes to life when the bird takes flight and shows that what was hidden beneath all this black were largely white wings! The startling contrast of the white wings when the bird flies, is fantastic to see live. Not only that, the males perform a noticeable aerial display where they start perched on a noticeable perch and then fly up and circle vertically back to the perch, as they do so the white wings are in full display and a short wing snap occurs at the top of the circle which also creates a finger-snapping sound. This gives it the Chilean name “run-run” which is a child’s game that makes a whirring snapping sound. The female is very unlike the male, and often causes identification problems. She is largely brownish above with rusty wings and rusty streaking; below she is off white and streaked brown. In Chile and southern Argentina this species is highly migratory. As there are no wintering populations in western Peru or northern Chile it is clear that all Chilean Spectacled Tyrants cross the Andes to winter on the Argentine or Bolivian side of the mountains! Cornell Lab of Ornithology, Neotropical Birds http://neotropical.birds.cornell.edu/por...

Those white eye rings do indeed call attention to its eyes with that black body. Quite a striking bird!

Thank you so much venusflytrap2000!

Thanks Marta--it was quite striking.