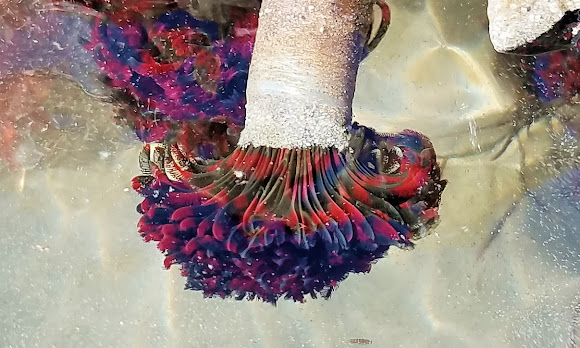 The Feather Duster Worm is a member of one of the largest groups of marine worms called the Polychaetes. The Feather Duster Worm will partly emerge to feed on small planktonic plants and animals using a large (up to 2 inches) plume shaped feeding devise that reminded early marine biologists of a feather duster. Detecting motion using small but sensitive eye spots, the Feather Duster Worm will instantly pull its plume back into its tube at the slightest hint of danger, however the withdrawn tentacles lack a trap door to seal the tube. The flexible, leathery, parchment-like tubes are attached to hard surfaces and can extend for a foot or more. The tubes often intertwine forming a refuge for other marine animals.

I wish I had more time to explore the coast along there.

That's not very far from the Ferry landing! There was a time we made fairly frequent trips that way to visit friends in Canada.

Thank you Leuba and Sarah for the kind comments. This was an exciting find and can't wait to go back in the spring to see them again and look for other creatures in the tide pools.

You do have some great specimens to show off ! Those plumes are a gorgeous colour. I didn't know that the tubes were flexible. Great spotting ! Thanks.

Thanks for asking thorton20. The name simply came from early marine biologist who thought that the worms plume resembled a feather duster.

Not to be rude

Feather duster??
Why is it named that?

Thank you Robert, Tukup and Mauna for your kind words. Thank you Daniele for the nomination.

Congratulations Brian. This is a beautiful critter and well-deserving of the nomination for SOTW.

Your spotting has been nominated for the Spotting of the Week. The winner will be chosen by the Project Noah Rangers based on a combination of factors including: uniqueness of the shot, status of the organism (for example, rare or endangered), quality of the information provided in the habitat and description sections. There is a subjective element, of course; the spotting with the highest number of Ranger votes is chosen. Congratulations on being nominated Brian!

Stunning Brian. Thank you for sharing this with us.

Thank you Liana, Mark and Neil.

An amazing spotting, Brian. Fantastic creatures, and the colours are gorgeous. The last two photos put everything into perspective. I don't recall seeing anything like this in our waters.

Wow nice spotting. I'll have to look closer neat visit to our shoreline.

Love the colours on this critter. It really does look like a feather duster...I can almost imagine plucking one to use for dusting :D Wonderful series. Thank you for sharing Brian :) Liana

Thanks for the kind words everybody. It would be interesting to see the actual worm. I also wonder why is the feathery plume is so colorful ?

Amazing things you find Brian. Another winner. Thanks.

Oh my, the colors!

I knew I had to see it on a computer screen...not on a mobile. I was right. This is wonderful. Your tide pools are fantastic...I want one!!!

Thank you very much Lauren.