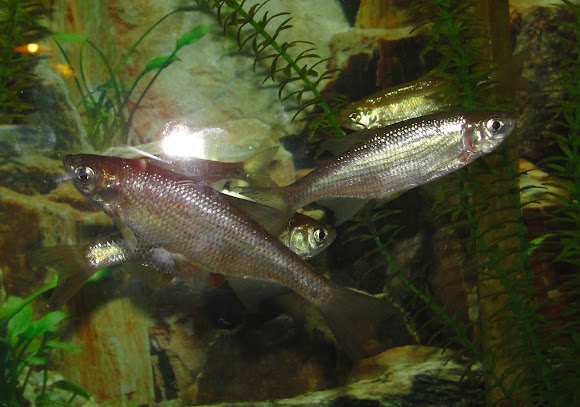 Golden shiners are a deep bodied minnow species with a distinctive golden olive-silver color. Their fins may appear from golden brown to orange-reddish in hue. Older fish have a more golden color while younger fish appear more silvery. This species has a distinctive scaleless strip on the underside between the pelvic fin and the anus. Also, the lateral line dips low on the sides of the fish, and there are no barbels on the mouth. Though it has been known to reach lengths of 12 in, in the wild the golden shiner is usually between 3 to 5 inches long. Spawning begins in the spring when water temperatures reach about 70°F and ceases when temperatures exceed 80°F. Sometimes spawning resumes in late summer if temperatures drop below 80°F. No nest is prepared. Adhesive eggs are scattered over algae or submerged vegetation and hatch in approximately 4 days under good conditions. Golden shiners are omnivorous. Plant material makes up about half the diet; the other half is animal material such as crustaceans, insects, and snails.

Golden shiners prefer clean clear water with an abundance of aquatic vegetation. They are most common in slow moving streams, permanent wetlands, and natural lakes. Because they are a very popular baitfish many public reservoirs have small populations from fisherman releasing unused bait.