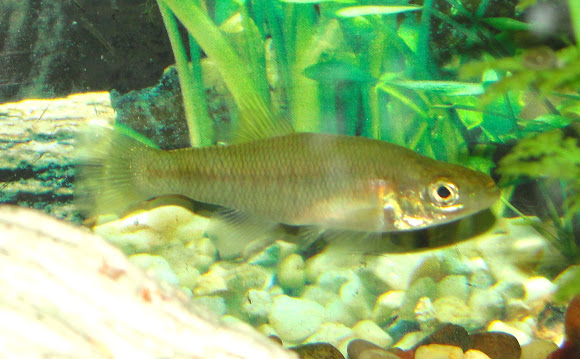 The banded killifish is the only freshwater member of the killifish family present in New York. Banded killifish are abundant on Long Island and in the Hudson River and St. Lawrence River drainages. They are fairly common in Lake Ontario and its tributaries, including the Finger Lakes and Oneida Lake. Scattered records elsewhere suggest that its distribution actually covers the state. The banded killifish is a small (2-4 inches), slender fish with a head that is somewhat flattened on top and a small mouth adapted to surface feeding. The tail is nearly square or slightly convex or rounded. Olive green on the back and white on the lower side and belly, it has numerous light and dark vertical bars along its sides. The numbers of bandings on the dorsal fin of a Banded Killifish are useful in determining the sex of this species. The females tend to grow larger in size than the male. They also have larger bandings on the sides and appear black in color. In contrast, the males have pale gray bandings that are close together. The adults feed on a variety of items such as insects, nymphs, mollusks, turbellarians, and other small crustaceans. Banded Killifish are commonly observed to spawn in dense aquatic vegetation because they practice external fertilization where the female lays her eggs equipped with adhesive threads that adhere to plants. They develop a bright blue patch near the anal fin. In addition, the lower portion of the body changes to a bright blue color. The male chooses a site in the shallow part of the water and protects it from other males. When a female appears, the male will court the female and fight with the other prospecting males. The female will emit one egg while the male pursues her. Once together, the female emits 10 eggs that falls onto the bottom or gets attached to aquatic plants in the chosen spawn area. The male will continue to pursue the female until the female have laid 50 to 100 eggs. A single female may lay several clutches of eggs during one summer. After the eggs have been fertilized, both the parents will leave and go their separate ways; the eggs do not receive parental care. 6-7 millimeter fries emerge within 10 to 12 days depending on the temperature of the water. They reach maturity at approximately 1 year with an average length of 6 cm.

found in the quiet waters of lakes, ponds, rivers, and estuaries.