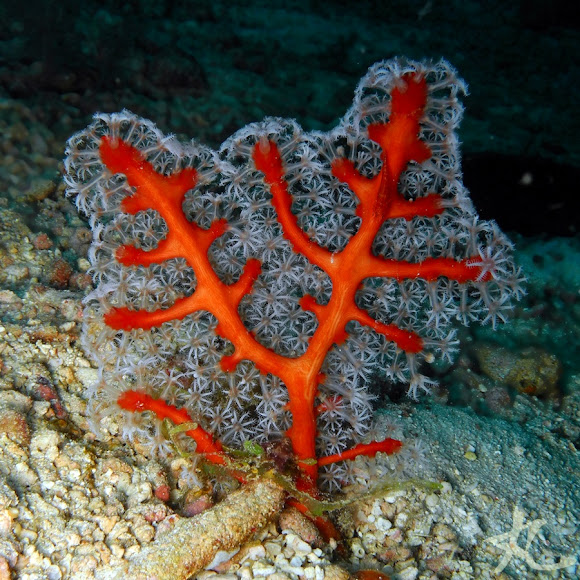 In spite of its hard skeleton, the organ-pipe coral is actually a type of soft coral, closely related to sea fans. It is the only known species of its genus. Its bright-red skeleton, which is made of calcium carbonate, contains many organ-pipe-like tubes (hence the name). In each tube is a series of polyps, each of which has eight feather- or flower-like tentacles, which are usually extended during the day. T. musica colonies can reach up to a meter across, but individual polyps are typically less than 3mm wide and only a few millimeters long.

This species typically occurs in shallow reef areas, possibly to 12m or more, and is found on exposed reef locations, and reef flats.

Spotted this very attractive coral in 24m of water at Dayang Beach during a day dive.

Fabulous! I love your spottings :)

Stunning. Ran out of adjectives. Just so great! Thanks for sharing all your amazing photos.

Thanks very much for all your comments, YukoChartraw! :)

It's breathtakingly beautiful! The pic #3 looks like a branch trapped in snow flakes. And the pic #4 is just.... wow!

Wonderful, Blogie - I love the close-up. I imagined organ corals to look a lot different but now I know what they really look like - thanks for sharing this

The permanently coloured skeleton of organ pipe corals makes it an attractive material for ornaments and jewellery. It is also crushed and sold in spice shops in countries like Yemen, and is a popular species in aquariums as it is easy to maintain and fairly tolerant of aquarium conditions. As a result, organ pipe corals are one of the 15 most traded genera of corals, and it is under considerable pressure from over-harvesting . Whilst trade in this species should be regulated under the Convention on International Trade in Endangered Species (CITES) it seems to have suffered from illegal collection, for example, several major collections of organ pipe coral skeletons were caught being smuggled from the Egyptian Red Sea coral reefs.
Organ pipe corals also face the many threats that are impacting coral reefs globally. It is estimated that 20 percent of the world’s coral reefs have already been effectively destroyed and show no immediate prospects of recovery, and 24 percent of the world’s reefs are under imminent risk of collapse due to human pressures. These human impacts include poor land management practices that are releasing more sediment, nutrients and pollutants into the oceans and stressing the fragile reef ecosystem. Over fishing has ‘knock-on’ effects that results in the increase of macro-algae that can out-compete and smother corals, and fishing using destructive methods physically devastates the reef. A further potential threat is the increase of coral bleaching events, as a result of global climate change.

Unlike most corals, it is not colourful polyps that make organ pipe corals attractive, but instead, their dark red coloured skeleton. The skeleton is composed of thin tubes, or pipes, (hence its common name), which are two millimetres in diameter and cemented together by horizontal plates at intervals of several centimeters. Unless the colony has been damaged, a mass of greenish-brown or grey polyps, each with eight tentacles, obscures the skeleton. These colonies can form mounds up to 50 centimetres in diameter and may dominate large patches of reef . There are at least two species, of which only Tubipora musica is named . The structure of the tentacles of different colonies of T. musica varies greatly; some have broad feather-like pinnae (tiny projections) down the sides of the tentacles, whilst others have no pinnae at all.