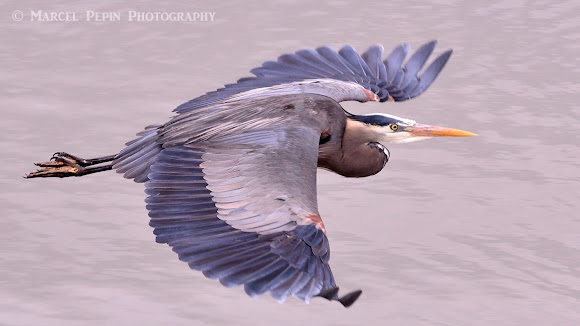 It is the largest North American heron and, among all extant herons, it is surpassed only by the Goliath Heron and the White-bellied Heron. It has head-to-tail length of 91–137 cm (36–54 in), a wingspan of 167–201 cm (66–79 in), a height of 115–138 cm (45–54 in), and a weight of 2.1–3.6 kg (4.6–7.9 lb). Notable features include slaty flight feathers, red-brown thighs, and a paired red-brown and black stripe up the flanks; the neck is rusty-gray, with black and white streaking down the front; the head is paler, with a nearly white face, and a pair of black plumes running from just above the eye to the back of the head. The feathers on the lower neck are long and plume-like; it also has plumes on the lower back at the start of the breeding season. The bill is dull yellowish, becoming orange briefly at the start of the breeding season, and the lower legs gray, also becoming orangey at the start of the breeding season. Immature birds are duller in color, with a dull blackish-gray crown, and the flank pattern only weakly defined; they have no plumes, and the bill is dull gray-yellow. Among standard measurements, the wing chord is 43–48 cm (17–19 in), the tail is 15.2–19 cm (6.0–7.5 in), the culmen is 13.1–15.2 cm (5.2–6.0 in) and the tarsus is 15.7–21 cm (6.2–8.3 in). The heron stride is around 22 cm (9 in), almost in a straight line. Two of the three front toes are generally closer together. In a track the front toes as well as the back often show the small talons. The subspecies differ only slightly in size and plumage tone, with the exception of subspecies occidentalis, which as well as normal colored birds, also has a distinct white morph, known as the Great White Heron (not to be confused with the Great Egret, for which "Great White Heron" was once a common name). It is found only in south Florida and some parts of the Caribbean. The Great White Heron differs from other Great Blues in bill morphology, head plume length, and in having a total lack of pigment in its plumage. This is mainly found near salt water, and was long thought to be a separate species. Birds intermediate between the normal morph and the white morph are known as Würdemann's Heron; these birds resemble a "normal" Great Blue with a white head. The theory that Great White Heron may be a separate species (A. occidentalis) from Great Blue Heron has again been given some support by David Sibley.

Captured off Iona Beach, Richmond, BC, Canada. there was a large gathering of GBH and the were all fishing. I counted over 40 on 1 beach

Another superb series! I can't get over how breathtaking the 2nd pic is! All of them are amazing, though!

Birdlady, I have joined your mission, thanks for the heads up ; )

been a while since I logged on and I must say... a tad rusty at this end LOL

you're welcome Noah, and thanks a bunch : )

Beautiful! This spotting would be suitable for the mission Breeding Birds of BC:
http://www.projectnoah.org/missions/9990...
Thanks for sharing! Iona is such a great place to bird.

Thank you for the information, Marcel.
You did really amazing pictures!

Superb!
How did you manage to shot such high definition photos during the flight? I am wondering what camera, lens and parameters you used...