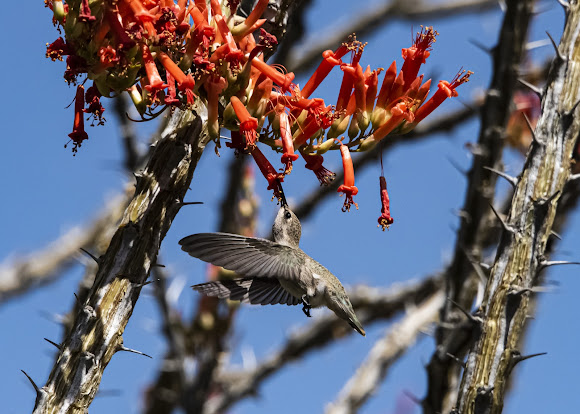 There is a mutual symbiotic relationship between costa’s hummingbirds and ocotillos…a deciduous desert plant. The costa’s is a smaller-sized hummingbird. That pictured feeding at an ocotillo bloom (photos 1 & 2) is a female with a mottled green head and back. The male (photo 5) has a very distinguishable purple gorget, as pictured. The ocotillo (photos 1, 2, 3) is a unique spiny cactus which in early spring blooms into brilliant trumpet-shaped red flowers. The stems break out into leaves after spring rains, and monsoon periods, into the summer. The leaves drop off in dry periods.

The ocotillo grows as high as 10 to 15 feet in canyons and mountains in the Sonoran and Chihuahuan deserts. Costa’s hummingbirds live year-round in some parts of the Sonoran desert. Also, some Costa's migrate south into Mexico in the fall, returning to the southwestern states of Arizona, California, New Mexico and Nevada in spring.

It has been determined the ocotillo and costa’s evolved over time, to each’s benefit. The ocotillo is an early spring bloomer, which times well with the costa’s migration and breeding habits. Ocotillo nectar is a major food source for the hummers, as well as bees and other nectar feeders, of which there are few other nectar sources in early spring in the desert. Coincidentally, as the Costa’s feeds on the tubular flowers, they are a significant help in pollination of the ocotillo, helping ensure its survival. In the 4th photo above, the nesting female costa’s is within 60 feet of two large ocotillos. Periodically, as pictured, she takes time from her incubation tasks to feed on the ocotillo flowers. As well, a male has staked his territory in the area…although males do not seem to be active in feeding and raising their young. So there you have it…all seems well in the neighborhood.

Machi a month ago