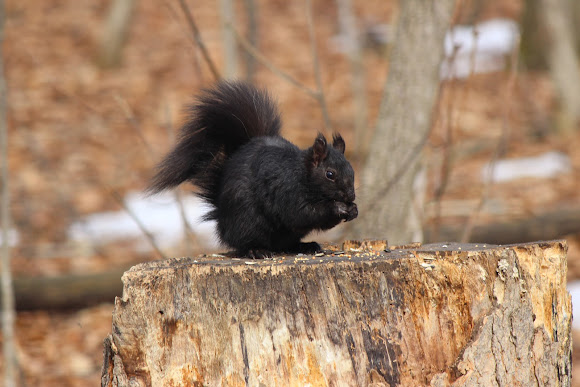 its a color transition gray

As a melanistic variety of the eastern gray squirrel, individual black squirrels can exist wherever grey squirrels live. Grey mating pairs cannot produce black offspring. Gray squirrels have two copies of a normal pigment gene and black squirrels have either one or two copies of a mutant pigment gene. If a black squirrel has two copies of the mutant gene it will be jet black. If it has one copy of a mutant gene and one normal gene it will be brown-black.[1] In areas with high concentrations of black squirrels, mixed litters are common.[2] The black subgroup seems to have been predominant throughout North America prior to the arrival of Europeans in the 16th century, as its dark color helped them hide in old growth forests which tended to be very dense and shaded. As time passed, hunting and deforestation led to biological advantages for grey coloured individuals.[3] Today, the black subgroup is particularly abundant in the northern part of the eastern gray squirrel's range.[4][5] This is likely due to the significantly increased cold tolerance of black squirrels which lose less heat than greys.[5] Black squirrels also enjoy concealment advantages in denser northern forests.