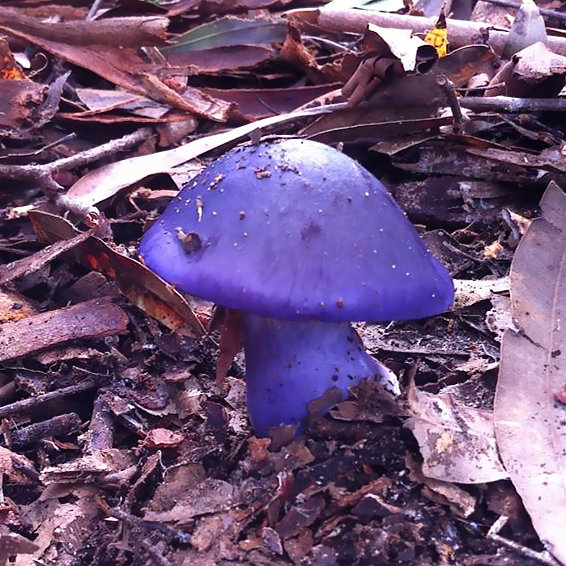 Small agaric mushroom, Cortinarius species (most likely C. archeri). Deep violet (purple) colour, satin texture, approx. 5-6 cms in height. Margin appears to be rounded, and a thick stipe which is bulbous at base, but no image of gills, nor sign of a veil (if any). This specimen has a convex although slightly conically-shaped cap, but perhaps it becomes more applanate, even depressed, with age. Images I've seen online of this species shows the cap spitting and margin flaring upwards, exposing the gills, but only observations over time would confirm if that's what happens here. Only one specimen found in the area. Cortinarius sp. fungi have rusty-brown spores. I'm leaning towards C. archeri as spotting ID because it's an Australian native, and the species is common in eucalypt or mixed forests. It's also mycorrhizal, forming a close relationship with the roots of eucalypts or closely related trees. Common in Australia, but also found in NZ. The Mushroom Observer reference link provides good images of the species.

Found beneath trees along a track at Somersby Falls, in Brisbane Water National Park. Growing in soil amongst leaf litter. Trees in area mostly native eucalypt species. The region has also had massive rainfall in recent days.

KD, I can't actually lay claim to this spotting. My sister found this beauty down on the Central Coast. I was green with envy, even though purple was the colour of the day :)

Thanks. It's worth the trip, I assure you. My sister actually spotted this one. She's a tragic nature nerd just like me - she just doesn't know it yet :-) She was so excited and just had to send me some photos.

That is fantastic! That's it. I'm heading to Australia for sure someday! :) Good find.

:) I guess we're both lucky Mark is around.

LOL And I'm a slow learner, particularly in the fungus department.

Wow that's a pretty mushroom, really nice color. I've personally never encountered a wood blewit this bright purple. The ones I've seen usually had caps that were duller and slightly darker at the center with hints of brown, and they also had pale stems. So for what it is worth I think it's perhaps a Cortinarius species.
http://en.wikipedia.org/wiki/Cortinarius...
http://en.wikipedia.org/wiki/Cortinarius...

Yeah, I know. The link says there are look-alike species - Cortinarius spp.and Leucopaxillus lilacinus. This spotting was not disturbed, so there won't be any gill pics. I'll check these out anyway. Thanks, Mark.

The only other option I know (and maybe more likely) would be Cortinarius archeri but a gill/stipe would help enormously.