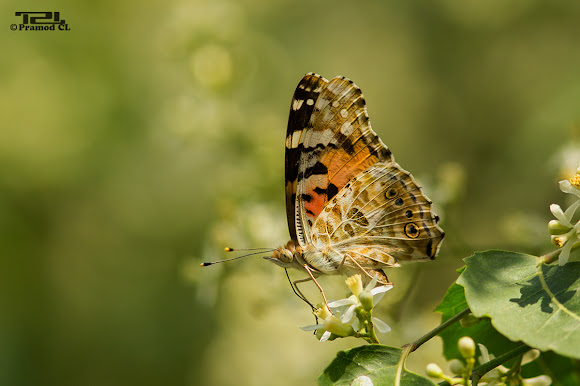 V. cardui is one of the most widespread of all butterflies, found on every continent except Antarctica and South America.[1] In Australia, V. cardui has a limited range around Bunbury, Fremantle, and Rottnest Island. However, its close relative, the Australian Painted Lady (Vanessa kershawi, sometimes considered a subspecies) ranges over half the continent. Other closely related species are the American Painted Lady (Vanessa virginiensis) and the West Coast Lady (Vanessa annabella).

At 90 °F (32 °C) the entire life cycles will take roughly 16 days. At 65 °F (18 °C) the life cycles will take months. At such extreme temperatures one can expect some deaths. At room temperatures the egg takes three to five days to hatch. The eggs are tiny, as tiny as a sugar crystal. They are green and ribbed and can be observed best with a magnifying glass. It is possible to view the cap at the top of the egg where the caterpillar will emerge. The embryo can be viewed growing inside the egg using a hand lens or dissecting scope. A high powered dissecting scope allows for watching hatching quite clearly. If eggs turn deep green, or become dented and wrinkled, the eggs do not contain living embryos. Just before hatching the embryos fill the whole egg and make the eggs look black or brown. As protection against disease, newly laid eggs may be knocked off the leaf, or left attached to the leaf, and dipped in dilute household bleach solution (1 part household bleach to 200 parts water) for 1–2 minutes and swished about. Afterwards, the eggs are left on a paper towel to dry. This will kill disease on the surface of the eggs and increase caterpillar survival. The caterpillars will emerge as small and black and will begin to eat immediately. As they grow they will shed their skins three times, called instars. At each instar the caterpillar will need much more food as it has expanded in size. It will also become more spiky. These spikes do not contain poison and are not sharp. The moulted skin appears as a black speck, what looks like dirt, near the caterpillar. Many people believe this to be the excretion of the caterpillar. Occasionally the moult will look like an entire, dead, caterpillar, as snake's skin does. If under stress they will sometimes shed into a fifth instar, which is a very large caterpillar. A fifth instar is a sign that care is incorrect in some way, typically due to diet.

Seen them feeding on Neem flowers