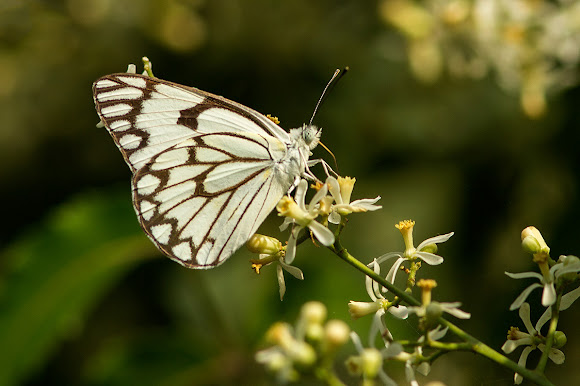 The upperside of males is white with the forewing having the costa from base to base of vein 11 dusky black and then jet black continuing into a widened and curving short streak along the disco-cellulars to the lower apex of the cell; apical area diagonally with the termen black, the former with six elongate outwardly pointed spots of the ground-colour enclosed one in each of the interspaces 3, 4, 5, 6, 8, and 9. Hind wing: uniform, the black along the venation on the underside seen through by transparency; termen between veins 2 and 6 somewhat broadly black, with a series of four round spots of the ground-colour in the interspaces; below vein 2 and above vein 6 the termen is very narrowly black. Underside: fore wing white, markings similar, more clearly defined, the white spots within the black apical area larger. Hind wing: yellowish white, all the reins very broadly bordered with black; interspaces 1, 2, 6, and 7 with cross-bars of black, beyond which there is a subterminal, somewhat broad, transverse band of black between veins 2 and 6. Cilia of both fore and hind wings white alternated with black. The ground-colour on both upper and under sides variable, often cream-coloured above; beneath: in some specimens, the base of cell and the elongate spots in apical area of fore wing, and the whole surface of the hind wing varies to rich chrome-yellow. Female similar; the black markings on both upper and under sides broader, the white spots on black apical area of fore wing often sub-obsolete above. Antennae in both sexes black, sparsely sprinkled with white dots; head, thorax and abdomen above and below white: thorax above often bluish grey.

Sri Lanka, the Himalayas from Kashmir to Sikkim at elevations below 6000 feet, and through the plains to Southern India. In the Nilgiris observed up to 8000 feet (Hampson). To the west it spreads through Persia and Arabia to East Africa. The species occurs over the greater part of sub-Saharan Africa.