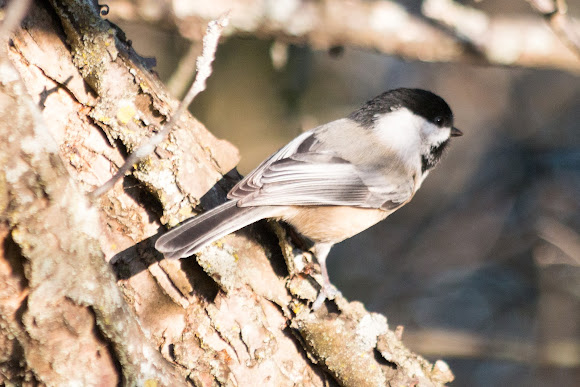 Second photo features the Chickadee photo-bombing a femalr Northern Cardinal (competing for food). Although this site is world renown for migratory birds (see below), this spotting is a resident. The black-capped chickadee (Poecile atricapillus) is a small, nonmigratory, North American songbird that lives in deciduous and mixed forests. It is a passerine bird in the tit family, the Paridae. It is well known for its ability to lower its body temperature during cold winter nights, its good spatial memory to relocate the caches where it stores food, and its boldness near humans (sometimes feeding from the hand). Although range can generally be used to separate them, the black-capped chickadee is very similar in appearance to the Carolina chickadee. The black-capped is larger on average, but this cannot be used reliably for identification. The most obvious difference between the two is in the wing feathers. In the black-capped chickadee, the wing feathers have white edges that are larger and more conspicuous than those of the Carolina chickadee. The latter is often mistaken for black-capped chickadees with feather dystrophy, which sometimes affects the appearance of the primary feathers making them look slimmer, a phenomenon caused by illnesses such as fatty liver disease in malnourished birds. Overall, the Carolina appears slightly paler colored, whereas the flanks of the black-capped can appear to have a trace of off-yellow or rusty coloration. Also, the black-capped generally has a more "ragged" looking black bib, whereas the bib of the Carolina has a more smooth-edged look. These subtle features are often even more vague in populations around where the black-capped and Carolina overlap in range (possibly the result of hybrids) and the two cannot always be distinguished as two species. The two species were formerly thought to be easily distinguished by call, but they often learn each other's vocalizations where their ranges overlap (their point of overlap is a narrow band that runs along the east-central United States, with the black-capped chickadee to the north). A bird located near the zone of overlap that sings both songs, or sings "odd-sounding" songs, cannot be positively identified solely by voice in the field.

Located in Lincoln Park, Montrose Point Bird Sanctuary attracts tens of thousands of migratory birds to stop for rest, food, and shelter each spring and fall. Within the natural area is “The Magic Hedge”, a 150-yard stretch of shrubs and trees, so-called because it attracts a curiously high number of migratory birds. Over 300 species of birds have been recorded at Montrose Point Bird Sanctuary and the adjacent Montrose Beach Dunes Natural Area, making it an internationally recognized area for birding. Important migrants include most species of warblers seen in the Chicago area, thrushes, sparrows, purple martins, woodpeckers, owls, and many others. “The Magic Hedge” at Montrose Point Bird Sanctuary did not just appear on its own. In the mid-20th century, the Army leased land at Montrose and built two barracks. Honeysuckle was planted to screen them from public view. Long after the Army left, the honeysuckle, now known to be an invasive species, remained and still forms much of the structure of The Magic Hedge. Ecological enhancements to the area first began in the 1980s, with the introduction of bird-friendly native shrubs such as nannyberry, serviceberry, and sumac. In 2015, the Chicago Park District created the Montrose Point Bird Sanctuary Master Plan to help guide future management of the site. The bird sanctuary increased in size in 2017 with the creation of a butterfly meadow at the west end of the site. In 2021, the Chicago Park District installed an accessible 1/3 mile long loop that travels near several popular birding locations including the Magic Hedge, Magic Clump, and the Tangle.

Funny story about this spotting. We were late season and late in the day and weren't seeing many birds (although we could hear them). Then we happened to come along behind a guy who was making bird calls and tossing out what I think was popcorn (see last photo), and lo-and-behold, out came the birds. Needless to say, we followed him for a while. I wonder about the ethics of feeding them in a sanctuary though.