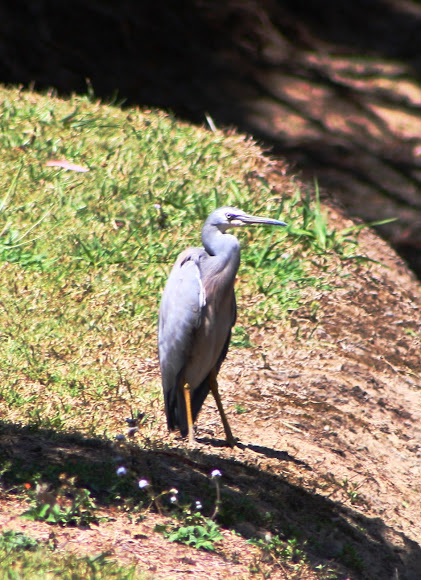 The White-faced Heron is mostly light blue-grey in colour, with a characteristic white face. In flight, the dark flight feathers of the wing contrast with the paler grey plumage, making this bird easily identifiable when viewed from below. It has a long, slim neck and a pointed grey-black bill. The legs are long and dull yellow in colour. Sexes are similar. When breeding, the birds have long feathers (nuptial plumes) on the head, neck and back. The White-faced Heron has a slow bouncing flight. Young White-faced Herons are similar in appearance to the non-breeding adults (no nuptial plumes), but are duller, with little or no white on the face. They often have a reddish colour on the underparts.

White-faced Herons are the most commonly seen herons in Australia. They are found throughout the mainland and Tasmania, and most coastal islands. They also occur in Indonesia, New Guinea, New Caledonia and New Zealand. White-faced Herons can be found anywhere where there is water, from tidal mudflats and coastal reefs to moist grasslands and gardens.

Spotted next to a dam, sitting close to a royal Spoonbill