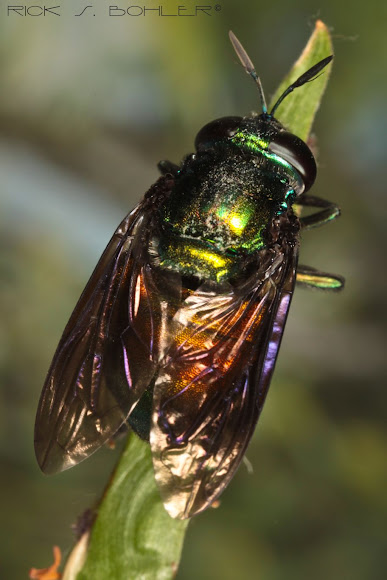 3/8" long metallic. hard to find info on this fly. If you look at the reference link you will see only one other spotting of this fly recorded and it is about 200 miles south west from the location I found this one.

Hover flies (family Syrphidae) of the genus Microdon are unusual among the Diptera. Like other members of the subfamily, they are myrmecophiles, meaning they inhabit the nests of ants. There are 249 species are known worldwide, with the greatest diversity being from the tropics; 30 species are known from North America, though it is expected that many of these species will be placed in other genera in time, as Microdon has been used as a catch-all for various unrelated species not placed in other genera

This fly has almost NEVER been photographed live. extremely rare!!! I took the pictures and set it free. Many pictures online of this fly with a needle in it's back :'(

Microdon are an amazing group. They are ant nest parasites as immatures. The integument of the larva is festooned with a variety of bizarre structures many of which we have no idea what they do, some are involved in sensing the environment and producing semiochemicals. The larva are chemical mimics of the ant brood and will be protected by the ants even though they are eating the ant larvae and pupae. The adults are not protected so eggs are laid near a nest opening, the larvae pupariate in a part of the nest that will afford the newly emerged adult rapid egress from the nest. The adults emerge at a time when the ants are least acitve. "Greg Paulson"