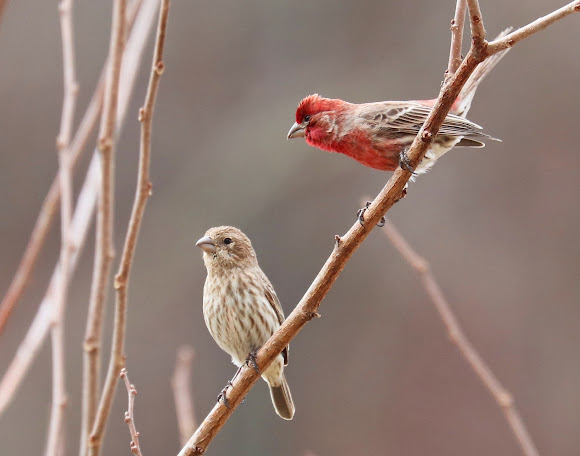 Love is in the air for these house finches!

Males have a red head and breast and a streaked, brown belly. The red coloring comes from pigments contained in its food during molt. So, the more pigment in the food, the redder the male. Females seem to prefer to mate with the reddest male they can find! Adult females are grayish brown overall, with a brown head, wings, and tail, and streaked, brown underparts.

During courtship, males sometimes feed the females in a display that begins with the female pecking at his bill and fluttering her wings, like a fledgling would do. The male then feeds her regurgitated food. 

Rural yard - house finches come nest in my yard every year. The male particularly likes to sit in a bush next to my deck each morning and sing his beautiful, warbling songs.

Thanks so much Danièle for SOTD for this lovely couple! They lift my spirits every morning and remind me that nicer weather will eventually get to the northeastern US! Also, thanks Felix, MnMs, and maplemoth for your comments :)

Congratulations Christine, your lovely contrasting pair of House Finches is our Spotting of the Day:

Thanks Danièle and Brian. They are a very cute couple - the male is very attentive and is constantly fluttering around her, so obviously delighted with his mate.

I love when you can capture the male and female in the same pic. Great pics Christine!

What a lovely spotting Christine! Great contrast between the male and female. Wonderful notes as always.