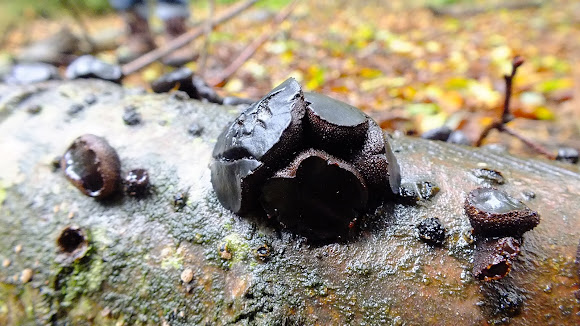 The fruitbody of Bulgaria inquinans is flat-topped at first but becoming slightly cup shaped and is easily overlooked because it is almost black. Its fertile surface is shiny, and the sides of the cup are felty and dark brown. The flesh of the fruitbody is dark ochre-brown. It is soft and rubbery in wet weather but in dry conditions it becomes tougher and more like elastic. Often growing in dense masses, the individual fruit bodies are between 0.5 and 4 cm across and typically 1cm tall.

A fairly common and widespread woodland species in Europe and in many other regions of the world including parts of North America, where it is commonly referred to as black jelly drops. Bulgaria inquinans is saprobic on felled oaks, sweet chestnut and beech, occasionally on ash.

Not my first choice either, Mark :)

Lol! Thanks, Tukup. Yeah they are hard to spot, but my rule of thumb when I go hiking is to always inspect fallen trees and tree stumps :)

I'm pretty sure I would have just walked by this Jae, or taken a picture of it for the mission "signs of wildlife" 😊 Great spotting.