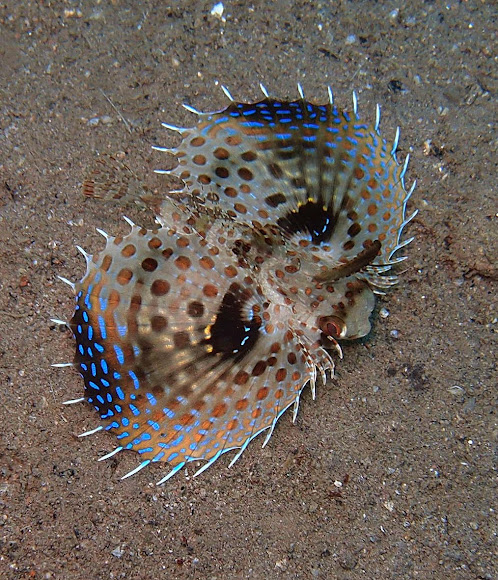 The oriental flying gurnard is up to 40 centimetres (16 in) in length and is usually a grayish brown color with dark markings. The fish has huge, round pectoral fins having many dark markings and a bright blue edge. The pectoral fins are normally held against the body, but when threatened the fins are expanded in to scare predators which include sea breams and mackerel.Their name is derived from the French word 'gurnard' meaning to grunt, for the grunting sound this fish makes.

This flying gurnard inhabits the Indo-Pacific Oceans at depths up to 100 metres (330 ft). The flying gurnard uses its pelvic fins to walk along the bottom of the ocean. It feeds on bony fish, bivalves, and crustaceans.

Marta, this is such a beautiful series! Congratulations!!!

Congratulations Marta! This great series has been chosen as a runner up in the "2012 Best Spotting of the Year" Fish category!

Congrats for these impressive spottings!!

and 85 other people favorited this spotting