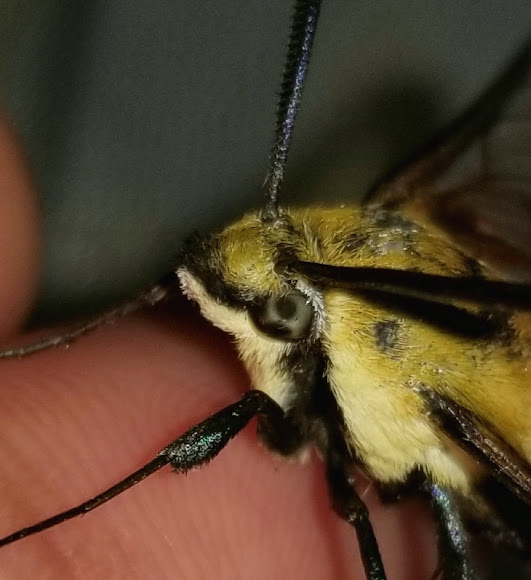 This moth was seen feeding off Moringa flowers, while watering the plants. At first I thought it was a carpenter bee (due to locality, and how common it is here), but I was more than happy to see this right on time for Moth week. This moth supposed to be brightly colored, with yellow throughout the thorax and fully clear wings (except outer margin of wings, which is brown). But these moths tend to loose their scales on its wings early after the pupa stage by its highly active flight tendencies. This moth has a 32–51 millimetres wingspan, while males are smaller than females.

In my garden, around 10:30 am. Suburban area Fort Worth, Texas. Tarrant co. North central Texas. Feeding off Moringa flowers

This moth flies during the daylight much like the other hummingbird moths, but it may also continue flight into the evening hours. The moth is found from the Northwest Territories, British Columbia, southern Ontario, eastern Manitoba, and in western Quebec in Canada. In the United States this species has been located in southern California and Baja California Norte, Illinois, east through most of the United States from Maine to West Virginia to Florida. Also seen in the Cariboo region of British Columbia. The larvae of this moth feed on many plants including honeysuckle, viburnum, hawthorn, snowberry, cherry, mint, and plum. Spotted for moth week 2020

Thanks for the nomination Ashley :-)