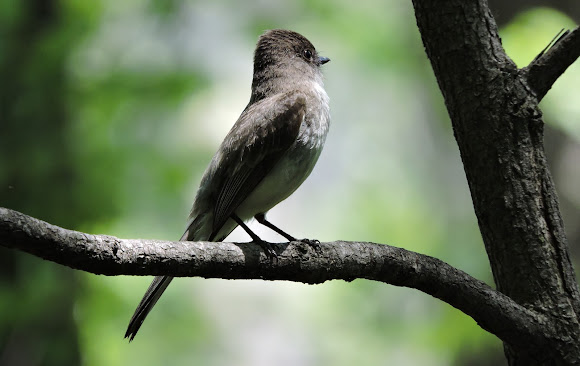 The eastern phoebe is a flycatcher that forages by watching from a perch and flying out to catch insects. Most are caught in mid-air, some are taken from foliage while hovering briefly. It is a brown-and-white songbird that sits upright and wags its tail from low perches.

Found in eastern United States favoring open woods such as yards, parks, woodlands, and woodland edges. Phoebes usually breed around buildings or bridges on which they construct their nests under the protection of an eave or ledge. This particular phoebe was spotted near a bridge in a wooded area with a stream nearby at Indiana Dunes State Park, Chesterton, Maryland

That is a cute name anfinn-54-1. Does she know about this little bird. It loves to sing.

My sister's name is Phoebe