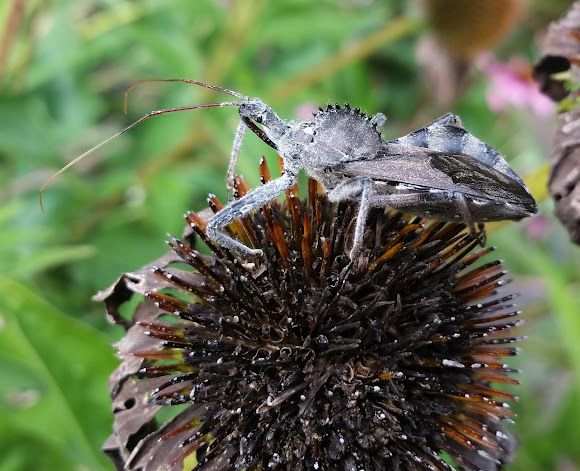 1 ½ inch bug with very long legs and long antennae. Distinguishing characteristic is the semicircular “wheel” located on top of the thorax. Long narrow head with a long, tubular proboscis at the end. The bug is brown in color with almost black and white stripes on its’ abdomen and white specks throughout its’ entire body. The bug has iridescent wings.

This bug was found in a park in Grand Island, Nebraska at 565 masl.

The Wheel Bug is an Assassin bug. Assassin bugs prey on other insects. They use their "beak" to stab their prey injecting it with enzymes. This paralyzes the prey and dissolves its insides. The proboscis will unfold forward when eating.

Thank you Tukup. It certainly made our trip to the park more exciting!

Cool spotting Watson5. I've never seen one of these. Thanks for sharing.