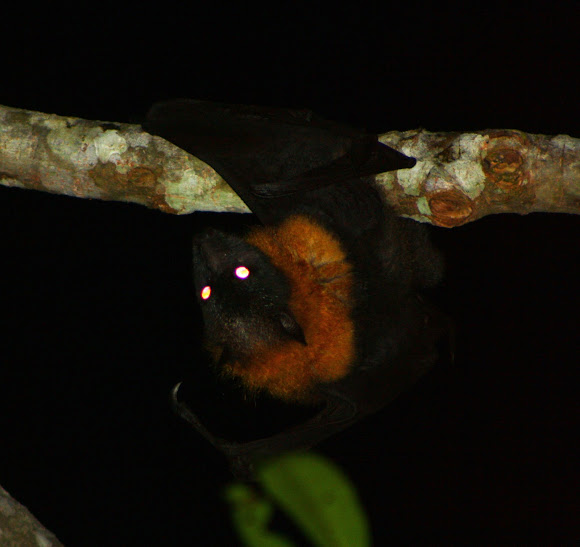 The grey-headed flying fox is the largest bat in Australia. It is tailless with claws on its first and second digits. Since it does not echolocate, it lacks tragus or leaf-ornamentation found in most species of Microchiroptera. It relies on sight to locate its food (nectar, pollen and native fruits) and thus has large eyes. The flying fox has a dark-grey body with a light-grey head and a reddish-brown neck collar of fur. It is unique among bats of the genus Pteropus in that fur on the legs extends all the way to the ankle. Adult grey-headed flying foxes have an average wingspan of up to 1 m (3.3 ft) and can weigh up to 1 kg

Grey-headed flying foxes live a variety of habitats, including rainforests, woodlands and swamps.During the day individuals reside in large roosts (colonies or 'camps') consisting of hundreds to tens of thousands of individuals. Colonies are formed in seemingly arbitrary locations. Roost vegetation includes rainforest patches, stands of Melaleuca, mangroves and riparian vegetation, but roosts also occupy highly modified vegetation in urban areas.Their population is very fluid, as they move in response to the irregular blossoming of certain plant species. The grey-headed flying fox is a partial migrant that uses winds to facilitate long-distance movement.It does not migrate in a specific direction, but rather in the direction that will be the most beneficial at the time.

Gorgeous orange colour. I love the one with the fig in it's mouth

I have replaced all the photos from my original spotting

Thanks! I hope to get better photos for this spotting toinght

Fortunately when i had next to no light their reflection was the only thing that allowed me to get some sort of focus in the shots!