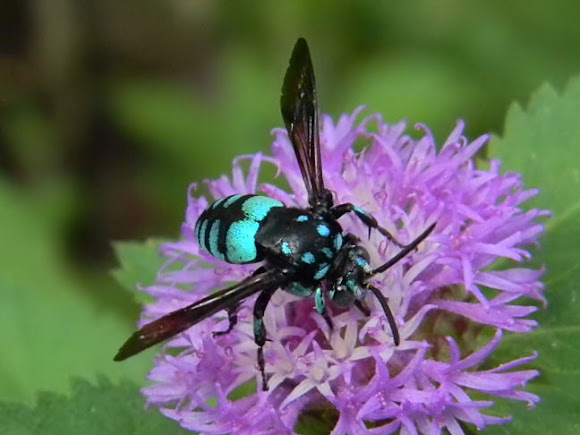 "A stocky bee, notable for its brilliant metallic blue and black banded colors, cuckoo bees are stunningly beautiful but these bees lead a life of deceit! They behave like cuckoo birds -- laying their eggs in the nests of other bees. The neon cuckoo bee, Thyreus nitidulus, with glittering metallic blue spots, lays its eggs in the nests of blue banded bees (Amegilla cingulata). The female neon cuckoo bee seeks out the burrow nests of the blue-banded bee, and lays an egg into a partly completed brood cell while it is unguarded. The larval cuckoo bee then consumes the larder and later emerges from the cell." See a spotting of the host species from the same location, here http://www.projectnoah.org/spottings/698...

They are particularly fond of the Brazilian button flower (Centratherum punctatum) as depicted here; in a large semi-urban yard & garden situated next to a disturbed patch of remnant forest.