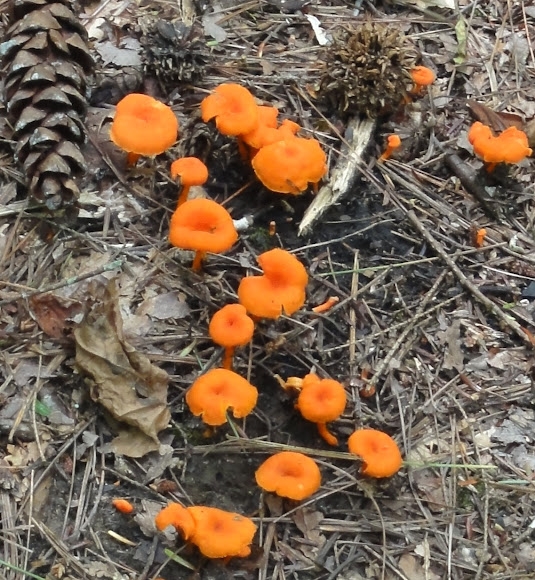 Spotted these small orange slightly cup-shaped mushrooms growing on somewhat dry pine needle and leaf debris in rhododendron/hemlock forest in southern Appalachian/Blue Ridge mountains. There is a strange darkish stain in the immediate surround of the fungi which suggested to me that it was maybe growing where something had completely decomposed? Bear Creek Trail Ellijay GA

I still think it's deceiver too. (Although both species in question are edible, you couldn't pay me money to eat them - just in case it turned out to be neither and was poisonous!) :)

Ok,Tiffany,thanks for the info,even so i continue to think that this one is a deciver :-)

Adding another pic to the other posting now...

Here's the other same-day spotting of what appeared to be the same type of mushroom in a different patch
http://www.projectnoah.org/spottings/173...
It's not a great shot, but you can see a little. When I get home tonight and have access to my picture files, I will see if I can crop down for detail on the gills of the broken mushrooms.

Hmm, I'm not too sure, Tiffany could be right... I was thrown a bit by how bright orange they are. Without a gill shot it is hard to say either way.

Thanks for your consideration :) these mushrooms def had caps with a depression in the center rather than being funnel shaped - pretty sure it's Laccaria (although as noted these were particularly orange)

I think that Gully nail it,to me is clearly a common deciver,the chanterelles are much more funnel shape,and more yellows than these,second photo is clearly a deciver to me :-)
Many times deciver haved that lettle funnel,more a little hole depression on the center,remember the name DECIVER,very variable shapes.

Did you check the gills? I think you have a wrong ID here... these look like chanterelles to me. Note the color and funnel shape of the cap - Laccaria does not have these traits.

I almost asked you for more detail, perfect! Yes this makes me more confident that they are Laccaria. I don't know the genus well enough to say that it is L. laccata for sure but it is the most common orangey Laccaria species.

I tried cropping the picture down to get more detail - do you still think so?

Or another similar Laccaria species, I believe. Yours are particularly orange though.