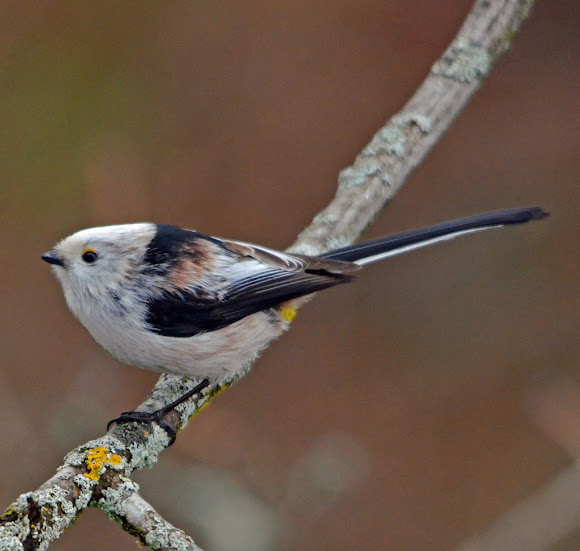 I heard this delightful tiny bird and his friend from my window before I spotted them. The long-tailed tit is easily recognizable with its tail bigger than its body, and undulating flight. Gregarious and noisy, these birds are usually seen in small flocks of about 20, and in mixed flocks with other tit species.The subspecies caudatus seen here is characterized by a white head, and is unusual for Switzerland (see notes).

The subspecies caudatus, from Northern Europe, is normally sedentary, but roams south in winter. Was spotted together on the same branch with Aegithalos europeaus europeaus, the subspecies locally common (http://www.projectnoah.org/spottings/181...). They flew off together. Thanks to Malcolm Wilton-Jones for confirmation on the subspecies.

Awww...cuteness in a little fluffy feather ball. Gorgeous shots Daniele. I would love to see one of these cute little birds! Thank you for sharing :)

Beautiful! I have them in my yard as well and I love seeing them. Nice spotting!

What a lovely shape - so cute !

Thank you Stanislav, and thanks for giving me the name of this little bird in Slovak :-) In French it's Mésange à longue queue.

welcome, i do that too sometimes ;)
great spotting, by the way

danielle, could you move this to birds? it is under arthropods ;)

Thank you Leanne! It happened exactly as you described it. The orange eyeliner is great but I won't try it on myself :-)

What a darling! I love the third shot Daniele. Loving this spotting, that's the great thing with birds, hear them first, run grab camera & with luck, great shots like these :) I feel your excitement. Love the orange eyeliner.

Thanks Tiz, António and Hema! Hema, their main diet is insects, including eggs and larva, but in winter they'll forage for anything. Tina, you're very kind :-) It was actually a bad day for photography, with little light: I would have liked a faster shutter speed; at the end it was a compromise for both shutter speed and ISO. This is the subspecies found in your country; not usual at my place!

too cute.What is it's major diet?It seems to have such a tiny beak!

Just beautiful Danièle,and rare ,i never saw these sub species,the common one is tiny and i saw them allways in flocks mixed with other tit's,i read that they use to make flocks of juvenil tits during the winter,it's a protection mesure,congrats and thanks for sharing

How great picture of this small tit! And yet an other sharp bird photo. I really have to step up a bit on my own birds. They are so very noisy! You are a great inspiration to keep trying :)

Thanks everyone for your comments! kdpicturemaker, yes, they're quite reminiscent of Australia's wrens... Marta, yes, the orange orbital ring is a lovely details on these birds....Shanna, the third shot is where I unfortunately got spotted... "Are you looking at meeee?" :-)

Such a delight to view this series, Danielle! Adorable!!

I love these fluffy birds! Is nice we can even see his orange little eyebrow :-)

Awww, what a cutie. I love the third shot.

That is ridiculously tiny!! It's amazing the wide size range in bird species. These remind me a lot of Australia's little wrens - differences of course such as shorter beak & a little bit larger - but at a glance...Beautiful photos of this and the other subspecies.