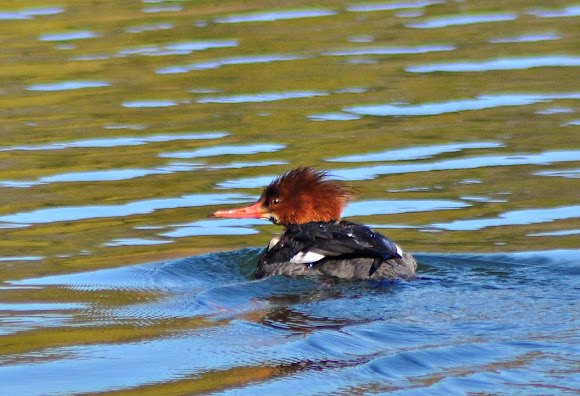 It is 58–72 cm (23–28 in) long with a 78–97 cm (31–38 in) wingspan, and a weight of 0.9–2.1 kg (2.0–4.6 lb); males average slightly larger than females but with some overlap. Like other species in the genus Mergus, it has a crest of longer head feathers, but these usually lie smoothly rounded behind the head, not normally forming an erect crest. Adult males in breeding plumage are easily distinguished, the body white with a variable salmon-pink tinge, the head black with an iridescent green gloss, the rump and tail grey, and the wings largely white on the inner half, black on the outer half. Females, and males in "eclipse" (non-breeding plumage, July to October) are largely grey, with a reddish-brown head, white chin, and white secondary feathers on the wing.

Shy of humans. I think one is a juvenile male and one is an adult male? Fun to watch them dive.