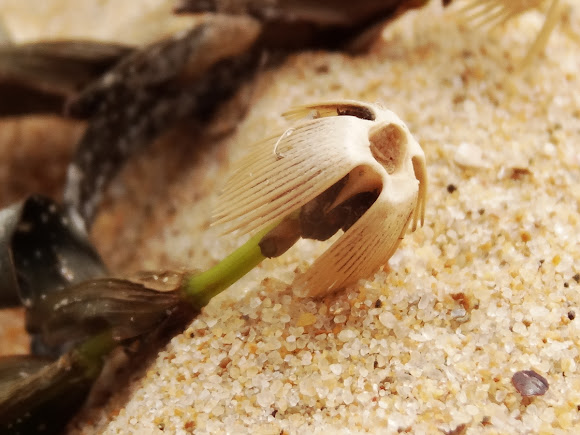 Thousands of these small plants were being flushed through the tiny, intertidal channels. They had a sharp, spiny foot which was superb for latching onto rocks and sand. Some would then work their way into the sand as the water pulsed them back and forth. Each was about 60mm long.

Sublittoral zone, near the mouth of a large open bay. The bay is generally very shallow with clean sand floor but receives a decent flush of southern ocean water via some very deep channels.

order: Alismatales
family: Cymodoceaceae
http://bie.ala.org.au/species/urn:lsid:b...
"The species is generally reported as occurring from Exmouth Gulf on the north-west coast of Western Australia, south along the west coast and east along the south coast as far as Wilsons Promontory in Victoria. However FloraBase reports an isolated specimen record from east of Port Hedland, over 500 kilometres north-east of Exmouth Gulf. It occurs primarily in the sublittoral zone, where it forms extensive meadows. It can occur as deep as 27 metres, but does not often form meadows below 13 metres. It can also grow in extremely shallow waters, with its leaves floating on the surface, although this often results in leaf damage and loss. The species tolerates a range of habitats. It has been found growing on a variety of substrates, including sand-covered rock, gravel, sand and clay. It grows in areas of both high and low water flow, and occurs in areas of very high salinity." - Wikipedia

Well done Mark!
Who needs an expensive camera when you can make a great composition from weeds.

Congrats Mark for the SOTD!

Congratulations on the SOTD Mark!

Fascinating spotting, Congratulations on the SOTD!

Amazing! Congratulations Mark & thanks for the info on a plant I had idea existed :)

Wonderful spotting. Thanks for sharing!

Wow thanks so much for the SOTD. These are simple small things but they are so critical to the network of life in that bay. I know many people have seriously worried about the loss of these local sea-grasses and the impact it would have (a little like the manatee problems in SE USA) so I almost felt like deliberately planting a few hundred whilst watching.

Congrats Mark, these wonderful sea nymphs are our Spotting of the Day!

Wow...so many unknown things...and me, a once upon Bio student! Thanks, Mark.

Strange and wonderful plant, and great notes, of course!

Great spotting and information Mark. Thanks !