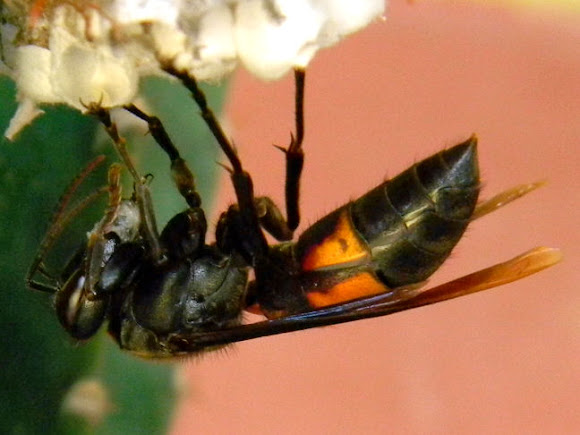 A large "greater banded hornet" preying on the larvae of a nest of paper wasps (Polistes sp.) as the adults stand idly by. The hosts of the nest appeared in a previous spotting http://www.projectnoah.org/spottings/175...

Nest on cactus (Cereus repandus) near house located in a large, semi-urban yard & garden, in close proximity to a disturbed patch of remnant lowland forest.

I was simply amazed as the paper wasps did not attack to repel this large invader eating their larvae. I was equally amazed that I could get so close to photograph it. I guess the larvae were delicious...

Thanks very much, J!

Awesome spotting, Scott! Thanks for sharing this fantastic encounter!

Yes, you're right, I mistook the orange band on yours to be two segments...still, very interesting behaviour!

Thanks very much, Adam. Based on your link which says that Vespa affinis is easily distinguished from V. tropica by having orange banding at the second gastral segment while that of the latter (V. tropica) is black... I am guessing mine is V. tropica.

Very cool spotting, looks similar to one of mine: http://www.projectnoah.org/spottings/124...

That's the only thing I can imagine: chemical cloaking device ;-)

Great spotting! The power of pheromones?

Thanks Antonio! I was astounded Nance...

That is rather mysterious that the paper wasps made no move at defending the nest.

Great cache S Frazier,in the rigth time :-) congrats and thanks for sharing