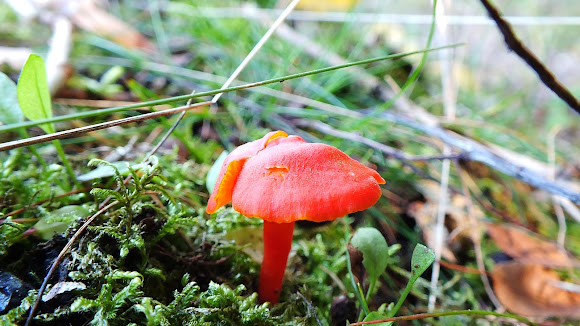 The dry, scurfy cap, typically 1 to 3 cm in diameter, is at first convex and then flattens sometimes with a slight depression. Initially scarlet or blood red, with age the cap fades from the margin inwards to orange and then to yellowish, also becoming smoother. The cap flesh is thin and reddish-orange. Reddish-brown with pale yellow edges, the gills are adnate, sometimes with a decurrent tooth, broad and fairly distant. Scarlet or orange-red but paler at base, the dry stipe is level, 0.3-0.5 cm diameter and 2-7 cm tall, no stem ring, reddish-orange stem flesh.

Woodland clearings and closely cropped or mown acid grassland where artificial fertilisers are not spread, also sometimes found on sandy heathland. Waxcaps have long been considered to be saprobic on the dead roots of grasses and other grassland plants, but it is now considered likely that there is some kind of mutual relationship between waxcaps and mosses.