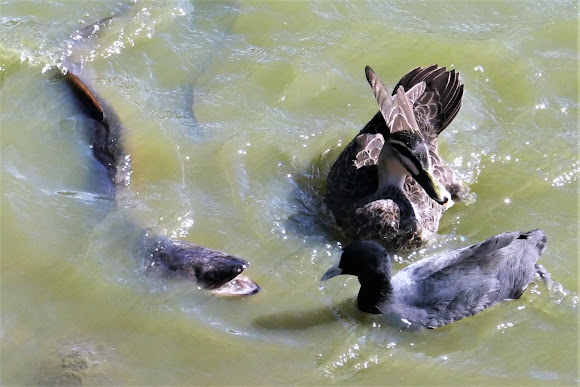 It can be found in many freshwater areas, including creeks, streams, rivers, swamps, dams, lagoons, and lakes although generally more often in rivers than lakes. These eels were spotted at the freshwater lake on the University of Queensland Campus, Brisbane. NB: The water quality in the lake is currently very poor due to an algal bloom. It is the worst I have ever seen in all the years that I've been coming here. I can only suggest it's due to the current, persistent drought. We've had very little rainfall these past few months to replenish the water, and an excess of nutrients such as phosphate causes the bloom. Animals have to poo, right? https://www.uq.edu.au/news/article/2019/...

The poor eels come off second-best, as do the turtles. Unfortunately, they are convenient stepping stones for the various birds that frequent the lake, so it's no wonder they get a bit snappy when the birds get too boisterous (1st photo). The birds in this spotting are Pacific black ducks, Eurasian coots, dusky moorhens, plus there are a dozen or more Brisbane short-necked turtles (not birds, just in case you were wondering). No one seems to hold a grudge though.

Thanks, Tukup. I watched this ruckus for ages - very amusing. I'll add to the mission. Totally missed that one.

Forgot to mention the great write-up. I appreciate the info.

Cool spotting Neil. I love to see "natural" confrontations. We have raccoons, opossums and skunks confronting each other nightly in our back yard and I love to watch which is the most aggressive. It changes from night to night. Yours looks like "interactions between species" to me :-) so should be a candidate for the 2019 Best Wildlife Photo.

Thanks, Brian. Eels are primarily carnivorous, so they would go for fish and crustaceans, both of which occur in the lake and river. There's no doubt the odd duckling would also be taken. The adult birds have absolutely no fear of the eels, and I saw a couple receive some mighty good pecks - they eels didn't argue and retreated.