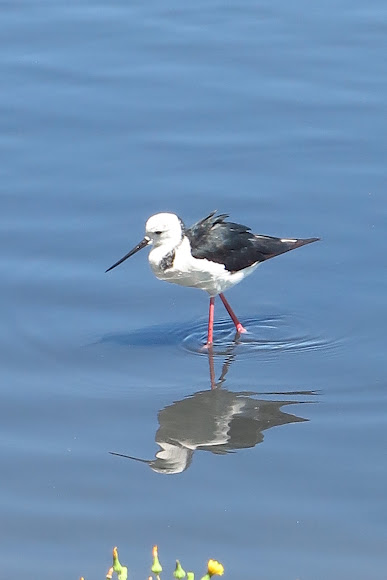 The Black-winged Stilt is a large black and white wader with long orange-red legs and a straight black bill. It has black on the back of the neck, a white collar and a red iris. Both sexes are similar, and the plumage does not change during the year. A migratory species, the Black-winged Stilt is also a social species, and is usually found in small groups. Their conservation status in Australia is secure.

Regenerated area of Homebush Bay, in Sydney's Bicentenial Park. The waterbird refuge was created in the 1950's as a result of unfinished works to reclaim land from estuarine mudflats. It is part of a network of habitats along the Parramatta River. Salt pans, tidal ponds and mangroves dominate the area. The breeding habitat of these stilts is marshes, shallow lakes and ponds. Some populations are migratory and move to the ocean coasts in winter; those in warmer regions are generally resident or short-range vagrants.

My first encounter with this species. This pond is only a stone's throw from Sydney's Olympic Park, where the 2000 Olympics were held.

Thanks very much, armadeus.4. I watched this fellow (and his mates) for quite some time. Fascinating.

The reflection is great! Love this series Neil. Thank you for sharing :)