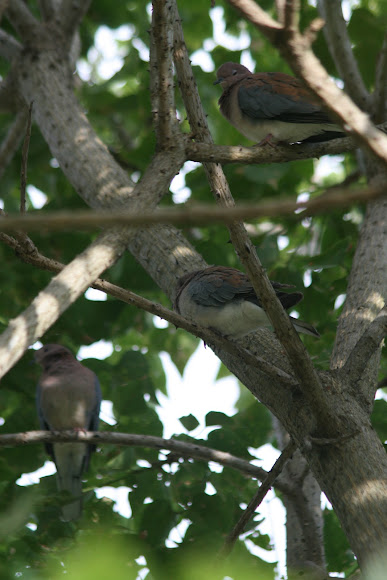 The Laughing Dove is a long-tailed, slim pigeon, typically 25 cm (9.8 in) in length. It is pinkish brown on the underside with a lilac tinged head and neck. The head and underparts are pinkish, shading to buff on the lower abdomen. A chequered rufous and grey patch is found on the sides of the neck and are made up of split feathers. The upper parts are brownish with a bluish-grey band along the wing. The back is uniform and dull brown in the Indian population. The African populations senegalensis and phoenicophila have a bluish grey rump and upper tail coverts but differ in the shades of the neck and wing feathers while aegyptiaca is larger and the head and nape are vinous and upper wing coverts are rufous. The tail is graduated and the outer feathers are tipped in white. The sexes are indistinguishable in the field. Young birds lack the chequered neck markings. The legs are red. The populations vary slightly in plumage with those from more arid zones being paler. Abnormal leucistic plumages have been noted

It is a common and widespread species in scrub, dry farmland and habitation over a good deal of its range, often becoming very tame. The species is found in much of Sub-Saharan Africa, Saudi Arabia, Iran, Afghanistan, Pakistan and India. It is also found in Israel, Lebanon, Syria, and Turkey (these populations may be derived from human introductions). They are mostly sedentary but some populations may make movements. Birds ringed in Gujarat have been recovered 200 km north in Pakistan and exhausted birds have been recorded landing on ships in the Arabian Sea. The species (thought to belong to the nominate population) was introduced to Perth in 1889 and has become established around Western Australia. Birds that land on ships may be introduced to new regions.