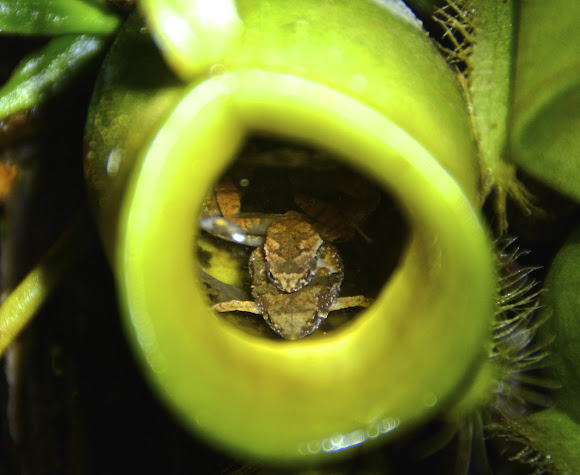 Microhyla borneensis (junior synonym Microhyla nepenthicola), also known as the Matang/Kubah narrow-mouthed frog, is a species of microhylid frog found in the Matang Range in Sarawak, Borneo. It was once the smallest known frog from the Old World (the current record holder is Paedophryne amauensis from New Guinea). Adult males of this species have a snout-vent length (SVL) of 10.6–12.8 mm (0.42–0.50 in) and Females of up to 19 mm. Tadpoles measure just 3 mm. Microhyla borneensis was first described by Hampton Wildman Parker in 1928. Frogs of the species that was eventually described as Microhyla nepenthicola had been known for at least 100 years prior to its description in 2010. However, scientists had always assumed that the frogs were juveniles of another species. Researchers Indraneil Das and Alexander Haas recognized that they were actually adults when they heard the frogs calling in Kubah National Park, since only adult frogs make calls. Adult males call from the pitcher plants at dusk. However, in 2011 it was shown that Microhyla borneensis and Microhyla nepenthicola are the same species. What was until that point commonly known as Microhyla borneensis was another species, newly described as Microhyla matang.

Swampy area close to a particular species of Pitcher Plant (Nepenthes ampullaria) which they lays their eggs. Pic#6 shows a tadpole in the Pitcher Plant.

This was the hi-light of my trip to Kubah National Park this trip as I have been wanting to see this tiny wonder since I came to know of it. Saw 3 pairs of them in amplexus, on the first night with the help of the guide. They are found among patches of a particular Pitcher Plant/Nepenthes ampullaria, hence its subsequent description as Microhyla nepenthicola. Could not find them again on the 2nd and 3rd night and was happy to see another pair on my 4th night. New Organism to Project Noah.

Thanks, @Daniele for the honour :)

Thanks too, @Polilla, @armadeus.4 and @triggsturner for your kind words and support :)

Thanks, @Mark for your kind words and support :)

Thanks, @Antonio for your kind words and support, am glad to be able to share at Project Noah :)

Thanks, @Ashley. I was very happy to see them, total of 4 pairs during the trip. During the day, I could hear them from time to time but can't find them, and also able to see the tadpoles in the Pitcher Plant, so I know they should be around there :). Will be my pleasure to show them to you when you visits!

Albert, I can't even explain how amazing I think this is! You know how badly I want to see these guys, and know that you have seen them I am counting on you to show me them when I come visit! Congrats on a well-deserved SOTD with such a cool critter!

Congratulations, Albert. In the first photo I thought that there was a snake eating the frog... Superb series.

Wow,awesome series Albert,fantastic capture,congrats on another super SOTD and thanks for sharing your amazing spotting page with the community

HI Samuel.
Yes, am on FB, same user name.
Kubah is not far from Kuching ;)

Hi Albert, nice pics of amplexus :) Im here in Kuching. Are you on FB?

Thanks again, @Daniele and I should say to you, watch out for an announcement at my FB soon ;)

Thanks, @Leana, @Lauren and @Lisa for the kind words and support and for this SOTD :)

Thanks too, @armadeus.4 and yes, its nice to be able to take pictures of the tadpoles too, although it was very difficult.

Then that makes this doubly special when you have both tadpoles and adults! Congratulations on your SOTD :)

Congratulations AlbertKang! This superb spotting has been selected as our SOTD! Thank you so much for sharing this amazing organism!

Nice to see a frog-friendly Nepenthes - wonder how many people try to rescue these !! Great series and spotting as usual. Thank you Albert.

And thank you again Albert for your continuing extraordinary contributions! And watch out our FB page :-)

Thanks, @Daniele for your kind words and support :)